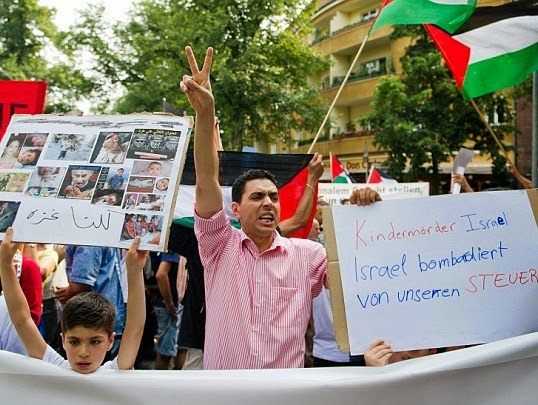 "A surge in anti-Semitism in Germany has led Yakov Hadas-Handelsman, Israeli ambassador in Berlin, to say it is like a return to the Nazi era: "They pursue the Jews in the streets of Berlin… as if we were in 1938."

His comments came as Islamists were blamed for an "explosion" of anti-Semitism that has undermined Germany’s efforts to banish racism since the Holocaust.

According to German news site dw.de, Hadas-Hannelsman said: "We have nothing against demonstrations or against freedom of expression - that's the core of democracy. But when, as happened this weekend, it leads to violence against the police or against pro-Israeli demonstrators, then it is unacceptable. I think Germans should be worried by that, because you also hear anti-Semitic slogans like 'Jews into the gas' - in Germany?"

It was reported that a group of Arabs shouted "Jew, Jew, cowardly pig, come out and fight alone" and "Death to Israel" at a recent demonstration and police officers did not interfere. The Berlin newspaper Tagesspiegel ran the headline: "Berlin police cower before Jew-haters."

At a Berlin mosque on Friday, Abu Bilal Ismail, an imam from Denmark, prayed for God "to destroy all Jews."

Speaking at the Al Nusra mosque, Ismail is seen in a YouTube clip calling for the death of Jews: “Oh Allah, destroy the Zionist Jews. They are no challenge for you. Count them and kill them to the very last one. Don’t spare a single one of them.”

“Oh Lord, bring torment upon them.”

Ismail is an imam at Aarhus’s Grimhøjmoskeen mosque. According to the Local the mosque is suspected by East Jutland Police of encouraging 22 young men to take part in Syria’s civil war.

"We can definitely say that when you go to that mosque, there is an increased risk of heading off for Syria," a police spokesman said earlier this year.

The Berlin demonstrations come after pro-Palestinian demonstrations in France turned into anti-Semitic riots. As Breitbart London reported, recent attacks on Jewish targets in France have fuelled an increasing exodus to Israel, with 2,200 Jews leaving France in the first six months of the year compared with fewer than 600 a year ago.

Stephan Grigat, a German political scientist and lecturer at the Institute for Jewish Studies at the University of Vienna, told dw.de the Gaza conflict has stirred up public opinion and brought Israel-hatred to Germany along with it: "You don't need great differentiation skills to be able to assert that this is straightforward anti-Semitism, in a drastic form that could also be found on the streets of Germany 70 years ago."

While anti-Israeli demonstrations were until recently largely driven by people who identified with left-wing politics, Grigat has observed a growing anti-Israel stance in mainstream German society.

And he finds that the term "Israel-criticism" alone reveals a lot about the negative sentiment. "After all," he said, "nobody speaks of 'Japan-criticism' or 'Sweden-criticism' when they do not approve of something the Japanese or Swedish government does.

"This expression shows what all this is really about: not reasonable criticism of individual decisions made by the Israeli government, but plain resentment of the existence of the Jewish state.""