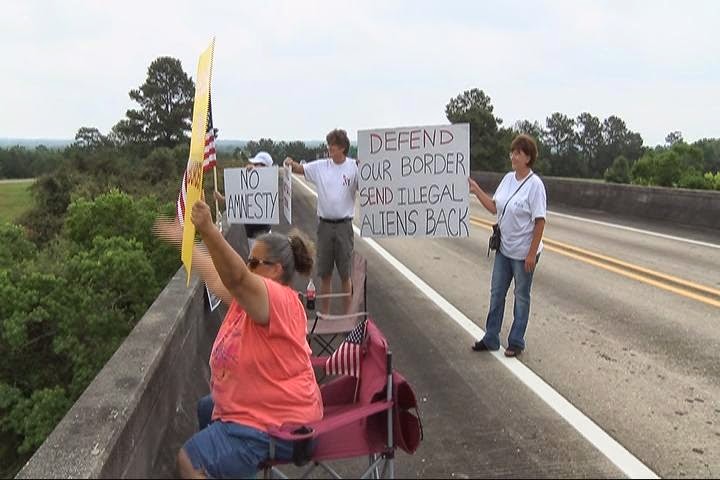 "About one dozen Pine Belt residents carried signs and American flags and waved at vehicles from an overpass on Interstate-59 Saturday to protest illegal immigration.  They were part of a National Day of Protest organized on social media by the "Make Them Listen" movement.

Folks from Petal, Pearl River and Jones counties displayed signs such as "Secure the Border" and "No Amnesty" as they stood on the overpass at the Hattiesburg-Laurel Regional Airport exit.

"The border is not secure and we're being invaded," said Darlene Thomas, one of the organizers of the protest. "It's not a legal process and it needs to stop," she said.

"They need to close that (southern) border," said Sue Jordan, one of the protesters. "It's not just about the kids (coming from Central America), it's about whatever else is coming across there that is dangerous to us," she said.

"I'm for legal immigration," said Isaac McCoy of Petal, who was born in Romania.  He said he became a naturalized citizen after being adopted by American parents.  "The illegal way is just not helping, in fact, I feel like it's a threat to our nation," McCoy said.

Similar protests Saturday were scheduled to take place in various locations in all 50 states."