"The owner of a children's home in the Mexican city of Zamora at the heart of an abuse scandal has been released by police.

Police raided the home on Tuesday after protests by parents that their children were being held against their will and abused.

Officers had found around 450 children living in appalling conditions.

Rosa Verduzco was detained and questioned on suspicion of wilful deprivation of liberty and abuse.

She had been hospitalized after the raid, suffering from high blood pressure and diabetes problems.

But she was released because statements from the victims suggested she wasn't involved in any mistreatment, said the attorney-general's office. The investigation is continuing, the spokesman added.

Ms Verduzco, also known as Mama Rosa, was seen by some as a saint-like figure. She raised thousands of children in the home.

She cultivated patrons among Mexico's political and intellectual elites, and was visited by presidents and renowned writers.

But victims had said she had left them exposed to years of deprivation and abuse where rape and beatings were a daily occurrence and children were forced to sleep and live in filthy, crowded conditions." 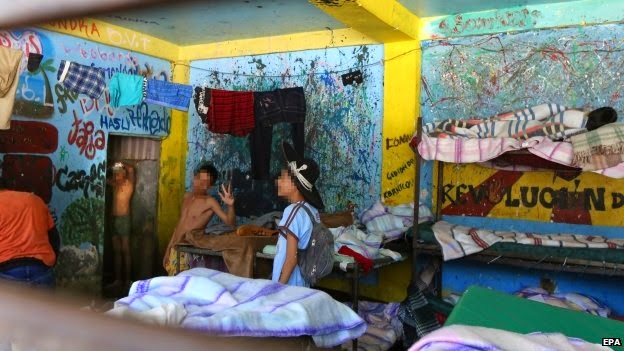 "Children at the Mexican children's home known as 'the big family'," EPA photo via BBC

Complaints had been ongoing for years but no action was taken:

"A child welfare specialist consulted by the newspaper (El Universal) in 2010 said the allegations of mistreatment went back two decades but that Ms Verduzco was "politically well connected"....

Also rescued were 138 adults aged up to 40, the government said.

Reports say the residents were forced to live in terrible conditions.

"I'm in utter dismay because we weren't expecting the conditions we found at the group home," Michoacan Governor Salvador Jara said.

The House of the Big Family has been operating for 40 years and was known locally as Mama Rosa's Home.

The authorities began to investigate the home after parents complained that they were denied access to their children.

One woman, who grew up at the home herself, gave birth to two children who were registered in the name of Ms Verduzco.

When the mother left the home, aged 31, she was not allowed to take her children with her, investigators said.

Mr Jara said the raid came after an official complaint was filed by the parents of five children who said they were being held at the home against their will.

He said the complaint was filed more than a year ago but did not specify why the authorities had not acted sooner.

Local media had reported on allegations made against the home as far back as 2010."...