Beaumont, Texas, "Secure the Border," July 19, 2014. Demonstrators call on Gov. Perry to militarize Texas state militia and send them to the border to stop illegals 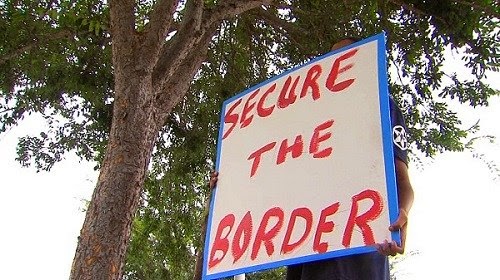 "Holding Texas state flags and signs reading "Secure the Border", a group of demonstrators stood along Dowlen Road in front of Chick-fil-A in Beaumont Saturday.

It was a small group, only about eight people, but their message was big.

“Our federal government is not controlling the border," said Roger Evans, a member of the local chapter of the Texas Nationalist Movement. Hundreds of similar protests are scheduled in dozens of states over the weekend...

“We specifically would like Governor (Rick) Perry to militarize the Texas state militia and send them to the border, to stop (immigrants) from ever coming across the river to start with,” said Evans.

“We just need to have a strong border that we have control of to be sovereign," said Doug Wallace, another protestor.

Even young children are taking a stand on immigration.

“We need to keep people from coming across our borders illegally so we don't pay for them," said 12-year-old Kira Holloway, who attended the demonstration with her parents.

Last month the Catholic Charities of Southeast Texas proposed to Jefferson County Commissioners that they use the former Al Price State Juvenile Correctional Facility in Beaumont, which closed down in 2012, to help house some of the immigrant children in Texas. No decision has been made yet.

“I don't think we should do it. Why should we use tax money to go out and repair that thing… so they can move illegal aliens in there?" said Evans.

The demonstrators are also calling on Governor Perry to call a special legislative session to make it illegal for any entity to execute a contract to house any undocumented immigrants in Texas.

But Evans is not totally against foreigners making the United States home.

“If they come in the right way, go through the proper process, that's not a problem," he said."