Border Patrol Agent on CNN says US government is aiding and abetting smuggling of illegal aliens, drug gang members, drugs and weapons into the US. 70% of Border Patrol no longer protect the border, just assist illegals

"Border Patrol agent Hector Garcia on Thursday accused the Obama administration of “aiding, abetting and facilitating the smuggling of illegal aliens across the border.” 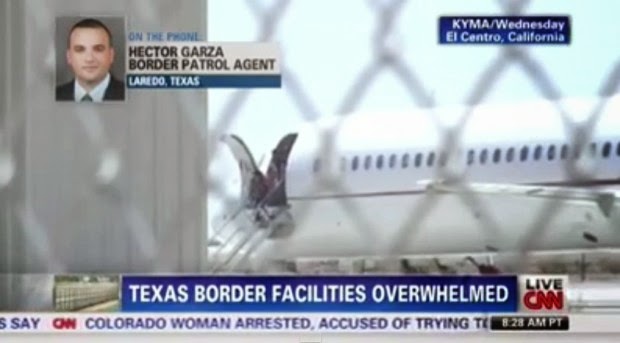 With resources being diverted to process illegals, the crisis then allows drug cartels to sneak illegal drugs and weapons across the U.S. border undetected, he explained.

Garza later argued that U.S. taxpayers are going to be on the hook to provide for the immigrant families.

“How do you expect a mother from Honduras that is crossing the country with 3 to 5 children, and they’re all young-aged children, how do you expect for that mother who comes to this country to actually begin working?” he asked.

He continued: “This illegal alien who comes to this country with 3 to 5 kids is gonna depend on our welfare system, on government assistance. And you know what? That is costing the taxpayer a lot of money.”

Watch the segment via CNN:

CNN contributor Ruben Navarrette questioned why the Border Patrol agent was even on the network discussing the border crisis after a gag order was reportedly placed on agents.

“Given the fact that there’s a gag order on Border Patrol agents in Texas, I’m surprised he’s even on this show saying these things if he’s with the border patrol at all,” Navarrette said."...

[Ed. note: In the CNN video Hector Garza responds that he is in fact a border patrol agent and names his local area.]

(continuing): "Garza did not address the alleged gag order.

Ira Mehlman, of the Federation for American Immigration Reform, also recently said that the Obama administration has issued a gag order for Border Patrol agents." via Free Rep.

This isn't the "showdown." Busloads of illegals aren't in charge of making or enforcing US laws. The parties involved are the US political class and US citizens. Many US citizens stupidly didn't want to see that the political class had become imperial. Meaning we the people have been transformed into worthless unwashed peasants:

7/3/14, "Showdown over immigration: 'This is an invasion'," CNN, by Ed Payne, Michael Martinez, and Holly Yan
.
"The national controversy over a surge of Central American immigrants illegally crossing the U.S. border established a new battleground this week in a small Southern California town, where angry crowds stopped detained migrants from entering their community.


The sentiment carried over to a raucous Wednesday night meeting at a Murrieta high school auditorium. Border Patrol and immigration officials got an earful."...

[Ed. note: "Raucous?" "An earful?" This is a life and death matter, the overthrow of a country and the removal of a country's southern border by whim of a self-appointed imperial political class. "Raucous" implies a group of children who've been let out of class for recess. "An earful" suggests a parent scolding a child for accidentally breaking a window.]

(continuing): ""This is an invasion," attendee Heidi Klute said before a full house. "Why isn't the National Guard stopping them from coming in?"

The overflow crowd of hundreds spilled out into the school's parking lot."...