Immigration and Illegal Aliens now #1 problem in US per Gallup Poll, July 2014 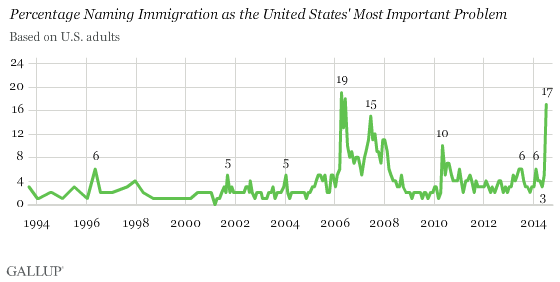 "With thousands of undocumented immigrant minors crossing the nation's southern border in recent months, the percentage of Americans citing immigration as the top problem has surged to 17% this month, up from 5% in June, and the highest seen since 2006. As a result, immigration now virtually ties "dissatisfaction with government," at 16%, as the primary issue Americans think of when asked to name the country's top problem....
.
Signaling that public mentions of immigration today could be stemming more from concern about illegal immigration than from support for immigration reform, mentions of the issue are significantly higher among Republicans (23%) than Democrats (11%). Gallup polling earlier this year showed Republicans with a preference for focusing on sealing the border, while Democrats prioritized addressing the status of illegal immigrants already here.

Additionally, older Americans are more likely than those younger than 50 to name immigration as the top issue. Regionally, concern is highest in the West. See the table on page 2 for details.... 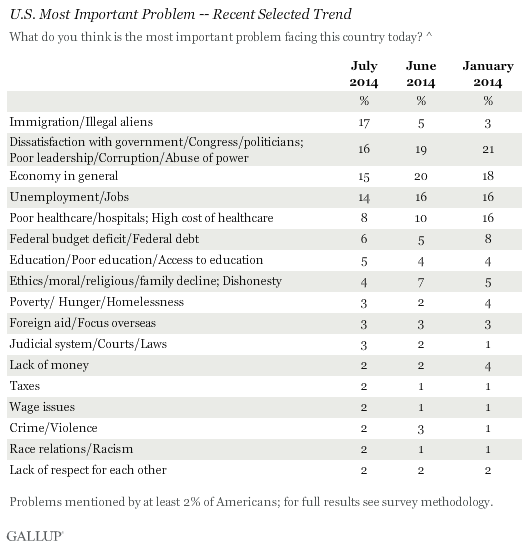 "In a Gallup poll released Tuesday, the percentage of Americans who say that immigration is the nation’s most important problem reached 17 percent, the highest level in eight years and the second-highest ever recorded by that polling organization....

Border security and immigration didn’t suddenly become three or four times as important as it was just a month ago. It’s just that the symptom has alerted people to the disease of a lawless situation encouraged by a lawless president and an ineffective immigration system....

As Gallup notes a dramatic jump in the number of Americans who see immigration and illegal aliens as the country’s most important problem, much of the increase comes among Republicans and older voters, namely those most likely to cast a ballot in November.

Gallup also points out that Republicans and Democrats are tied in the public perception of which party is likely to do a better job handling the most important problem (whatever that is for the particular person being asked). Historically, this suggests a strong showing for Republicans in the coming elections.

Although the percentage who believe the parties are equally (in)capable of dealing with the issue (or who had no opinion) reached a record high of 29 percent, an overall decline in belief in the competence of government should also benefit the GOP with Democrats perceived, perhaps more than at any point during my lifetime, as the party of unlimited government. How much things have changed since Bill Clinton uttered, even if insincerely, “We know big government does not have all the answers.…The era of big government is over.”"...via Lucianne