US taxpayers send another $500,000 million to West Bank Muslim terrorists via Obama Exec. Order, Fri., 7/26/13. US congress should resign, American citizens have no protection from the Executive Branch

The executive order, addressed to Secretary of State John Kerry, was quietly signed Friday afternoon, as the media’s full attention was focused upon a royal birth.

In the order, President Obama writes, “I hereby certify that it is important to the national security interests of the United States to waive the provisions of section 7040(a) of the Act as carried forward by the CR, in order to provide funds appropriated to carry out chapter 4 of part II of the Foreign Assistance Act, as amended, to the Palestinian Authority.”

The move comes on the heels of a 2012 executive order in which Obama waived a congressional ban on funding the Palestinian Authority and sent the Hamas terror led organization $147 million American taxpayer dollars. He also removed all spending restrictions on that money, restrictions which dictate what the funds can and cannot be used for, ie. humanitarian assistance, education, betterment of society, etc.  Thus enabling the money to be used for military equipment.

Ed Brown, a DC watchdog writes, “When the next Palestinian/Israeli conflict erupts because Hamas led Palestine is lobbing rockets over the fence into Israel —– don’t forget who paid for those rockets: you did, Mr. & Mrs. American taxpayer.”

Brown’s assertion is backed by those made by political commentator Dean Garrison. Garrison says, “I am not sure why we even have a legislative branch in 2013, because it’s obvious that Obama and company are going to do what they want anyway.”

“Whether this money eventually finds its way into the hands of terrorists, or not, is not entirely the point. Americans are sick of hearing how we need to make cuts, tighten our belts and sacrifice while our government keeps sending money elsewhere.”" via Free Republic

"Among Palestinians, who've been getting about $500 million annually, only 16 percent viewed the U.S. favorably. Bear this in mind as the U.S. attempts to restart peace negotiations between the Israelis and Palestinians, who haven't held such talks in the past three years."... 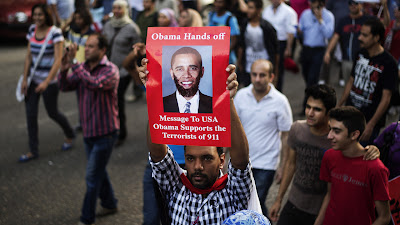 "A protester denounces President Obama during a march near Cairo's Tahrir Square on July 7." afp, getty via NPR

Comment: In 2002 Samantha Power said US taxpayers must give "a mammoth protection force" to Palestine. The left acknowledged in mid 2011 that Obama is garrisoning the world, purposely endangering Americans and everyone else. But no one stops him:

"It's a story that should take your breath away....It involves at least 97 countries, across the bulk of the global south, much of it coinciding with the oil heartlands of the planet. A startling number of these nations are now in turmoil, and in every single one of them -- from Afghanistan and Algeria to Yemen and Zambia --

Washington is militarily involved, overtly or covertly,
Garrisoning the planet is just part of it. The Pentagon and U.S. intelligence services are also running covert special forces and spy operations, launching drone attacks, building bases and secret prisons, training, arming, and funding local security forces, and engaging in a host of other militarized activities right up to full-scale war....

In addition to its own military efforts, the Obama administration has also arranged for the sale of weaponry to regimes in arc states across the Middle East, including Bahrain, Egypt, Iraq, Jordan, Kuwait, Morocco, Saudi Arabia, Tunisia, the United Arab Emirate, and Yemen. It has been indoctrinating and schooling indigenous military partners through the State Department's and Pentagon's International Military Education and Training program. Last year, it provided training to more than 7,000 students from 130 countries."...

A Zogby poll in six Arab countries found Obama has driven anti-American sentiment even higher than it was under George Bush. (parag. 25 in article)

"Samantha Power, a Harvard University professor, had no idea who Senator Barack Obama was when his office called in 2005 looking for an appointment to discuss her 2003 Pulitzer Prize-winning book on genocide (""A Problem from Hell: America and the Age of Genocide," which discusses American complicity in various 20th-century genocides from Armenia to Rwanda.)."...

Posted on this blog, 5/21/11, In 2002 Samantha Power spoke of billions in 'investment' needed in military aid for the state of Palestine. In 2005 Obama called.

At 1:22, Power speaks of "a mammoth protection force" for Palestine.