Obama's science denial is damaging to the US, his statements and actions don't meet mimimum legal standards much less scientific ones. Group files amicus brief with Supreme Court based on science

.
"This is the first time that the high court has been asked to consider purely scientific arguments rather than, for instance, the EPA's failure to follow the recommendations of its inspector general." Dr. Fulks has a doctorate in physics from University of Chicago, Laboratory for Astrophysics and Space Research.

"In 1960 when a U-2 spy plane disappeared over the Soviet Union, President Dwight Eisenhower told the world that it was a "weather research aircraft" flying out of Turkey. That cover story worked for a week, until Soviet Premier Nikita Khrushchev confirmed that the pilot had been captured deep in Soviet territory. Should an American president have supported an elaborate fabrication? It served no lasting purpose and demeaned a great president.

The cases that followed involving Presidents Richard Nixon and Bill Clinton were far less excusable and far more damaging to the presidency. They stretched the truth to avoid accountability.

Now we have yet a different situation where a president is trying to sell a vast program of carbon controls and renewable energy subsidies, based on arguments that may meet political standards for honesty but fail scientific, engineering and legal standards. That is far more damaging to this nation than Clinton denying an affair with Monica Lewinsky.

President Barack Obama's "climate change" speech last month reiterated his assertions that the earth is warming dangerously, that human emissions of carbon dioxide are clearly responsible and that virtually all scientists agree with him. As 115 scientists from around the world told him several years ago: "With all due respect, Mr. President, that is not true." One was Nobel laureate in physics Ivar Giaever, a Democrat. The president now calls those who dispute his hysteria the "Flat Earth Society."

Because the president knows that Congress and the American people will never support carbon reduction schemes that seriously harm our economy, he is pursuing a strategy involving rhetorical subterfuges while his Environmental Protection Agency quietly moves forward with regulations.

Consequently, 11 of us filed an amicus brief with the Supreme Court recently asking it to overturn the EPA's "endangerment finding" on carbon dioxide. This is the first time that the high court has been asked to consider purely scientific arguments rather than, for instance, the EPA's failure to follow the recommendations of its inspector general.

We prove that the EPA's "three lines of evidence" are fatally flawed, based on multiple robust data sets, not on "expert opinion" from those paid to support the president's position. Honest data show no unusual warming in the latter half of the 20th century and none at all for the past 15 years, despite a slow increase in carbon climate models, for which the taxpayer has paid so dearly, are epic failures.

What about the programs that the president is trying to sell to cure a problem that does not exist? These are substantial hoaxes also.

While "efficient use of energy" and "renewable energy" sound good, they are far from the reality. Ethanol, solar and wind typically produce little net energy beyond what went into their manufacture. They merely launder high-quality energy from fossil fuels into less desirable but politically popular kinds.

Remarkably, wind and solar do not even reduce our "carbon footprint," because they need backup by special natural gas power plants designed for rapid startup. These are far less efficient than state-of-the-art gas-turbine plants that run continuously. Scrapping wind and solar programs would hugely benefit ratepayers and burn less natural gas overall.

Because Obama has no scientific education, he can hardly be expected to understand the details of what we are saying. But as an attorney, he should know what constitutes honest argument.

Gordon J. Fulks lives in Corbett. He holds a doctorate in physics from the University of Chicago, Laboratory for Astrophysics and Space Research." via Junk Science


Obama knew he could make up any falsehood he wanted in his June 25, 2013 CO2 terror speech.
There is a fortune at stake. He knew no one dared criticize him and even if they did, major media wouldn't report it: .

8/1/12, "IPCC Lead Author Misleads US Congress," Roger Pielke Jr. blog
.
"The politicization of climate science is so complete that the lead author of the IPCC's Working Group II on climate impacts feels comfortable presenting testimony to the US Congress that fundamentally misrepresents what the IPCC has concluded. I am referring to testimony given today by Christopher Field, a professor at Stanford, to the US Senate."...

"STATEMENT OF DR. ROGER PIELKE, JR. to the COMMITTEE ON ENVIRONMENT AND PUBLIC WORKS of the UNITED STATES SENATE – HEARING on CLIMATE CHANGE: IT’S HAPPENING NOW"

Fact: On climate time scales there's been no increase in US hurricanes, normalized US hurricane damage or tropical cyclone landfalls globally


IPCC: "Observations to date provide no conclusive and general proof as to how climate change affects flood behavior" http://rogerpielkejr.blogspot.com/2013/01/extreme-misrepresentation-usgcrp-and.html …"


My academic degrees are in mathematics, public policy
and political science. I began studying
extreme weather and climate in 1993
at the National Center for Atmospheric Research in
Boulder, CO. Over the past 20 years I have collaborated with
researchers around the world to Publish dozens of peer-
reviewed papers on hurricanes, floods, tornadoes,
Australian bushfires, earthquakes and other subjects related to extreme events. Since 2001, I have been a professor of

Big money was made on the 2007 5-4 Supreme Court decision allowing regulation of CO2 from tailpipes. For example petitioner Entergy's stock peaked on news of the ruling. Entergy stock chart 2003-2013, Marketwatch:
.

Entergy stock soared to its then all time high, $107.52 (Source: "On Monday, when the EPA decision came down, Entergy stock jumped to an all-time high of $107.52 per share."...Washington Examiner editorial, "Ruling on EPA favors Big Energy," April 6, 2007, link now inactive). The decision was also a boon for organized crime involved in the carbon trading industry.

Justice Stevens mistakenly cites the UN as a scientific authority on the idea that CO2 rise causes dangerous temperature rise. As of 2013 this isn't proven. He describes the origin of the UN IPCC, the 1992 UN Rio convention, that Pres. Bush #1 signed the UNFCCC agreement. See paragraphs in Section I and the beginning of Section II. UN personnel are unelected, unaccountable, can't be prosecuted civilly or criminally anywhere in the world, can take US taxpayer money and put it in a personal bank account and nothing will happen to them. Why cite such a group for any reason much less as a scientific source? The UN IPCC gets at least half its budget from the US taxpayer. UN IPCC personnel then jet set around the world on our money and lecture us that our lifestyles are unsustainable.

The presentation of Bush administration lawyers was just as bad. They actually agreed that human CO2 causes global warming. The case should be retried just for lack of competent counsel:

EPA does not dispute the existence of a causal connection between man-made greenhouse gas emissions and global warming. At a minimum, therefore, EPA’s refusal to regulate such emissions “contributes” to Massachusetts’ injuries."...

Most of what Justice Stevens states in the paragraphs below is demonstrably false as of 2013. 2006-2007 was the height of the global warming/Al Gore frenzy coupled with a criminally cavalier Bush administration. Meaning no one was there on behalf of the facts. Justice Stevens:


"The Injury
The harms associated with climate change are serious and well recognized. Indeed, the NRC Report itself—which EPA regards as an “objective and independent assessment of the relevant science,” 68 Fed. Reg. 52930—identifies a number of environmental changes that have already inflicted significant harms, including “the global retreat of mountain glaciers, reduction in snow-cover extent, the earlier spring melting of rivers and lakes, [and] the accelerated rate of rise of sea levels during the 20th century relative to the past few thousand years … .” NRC Report 16.
Petitioners allege that this only hints at the environmental damage yet to come. According to the climate scientist Michael MacCracken, “qualified scientific experts involved in climate change research” have reached a “strong consensus” that global warming threatens
(among other things) a precipitate rise in sea levels by the end of the century, MacCracken Decl. ¶15, Stdg. App. 207, “severe and irreversible changes to natural ecosystems,” id., ¶5(d), at 209, a “significant reduction in water storage in winter snowpack in mountainous regions with direct and important economic consequences,” ibid., and an increase in the spread of disease, id., ¶28, at 218–219. He also observes that rising ocean temperatures may contribute to the ferocity of hurricanes. Id., ¶¶23–25, at 216–217.18"...

Many people were on the gravy train in this case:

"On April 2, 2007, in a 5-4 vote, the U.S. Supreme Court sided with the Sierra Club, 12 states, 3 cities, and other petitioners by agreeing that carbon dioxide and other global warming pollutants can be regulated under the Clean Air Act....


Obama 'climate action' in Nov. 2012  included giving $6 billion US taxpayer dollars for 'clean energy' to the Sultan of Brunei who owns 5000+ cars and to the Pres. of Indonesia, whose country is so corrupt even the World Bank says crime adds 20% to costs.

Below, one of the Sultan of Brunei's cars: 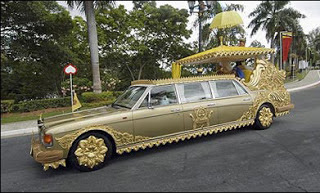