"After five years of failing to spur a robust economic recovery through spending and tax hikes, the world's richest countries have hit upon a new idea that looks a lot like the old: International coordination to raise taxes on business.

The Organization for Economic Cooperation and Development on Friday presented its action plan to combat what it calls "base erosion and profit shifting," or BEPS. This is bureaucratese for not paying as much tax as government wishes you did. The plan bemoans the danger of "double non-taxation," whatever that is, and even raises the specter of "global tax chaos" if this bogeyman called BEPS isn't tamed.

Don't be fooled, because this is an attempt to limit corporate global tax competition and take more cash out of the private economy. In the U.S., the Obama Administration has made a five-year fetish of attacking successful American companies that dare to keep overseas profits overseas rather than pay America's 35% corporate rate (plus state taxes). In the U.K., Starbucks, SBUX +0.33% Google GOOG +1.57% and Amazon have been treated as scofflaws for not paying what politicians call their "fair share."

This share has nothing to do with actual profits or evading the law, but rather a sense that governments can extract more revenue by exploiting what the OECD calls the "reputational risk" for companies of being labeled a tax evader. The politicians create the reputational risk for companies like Apple and then claim to want to save the same companies from it.

Alas for the politicians, the tax data don't support their anecdotes. U.S. corporate tax payments as a percentage of GDP were 2.38% in 2011, slightly above their 40-year average of 2.29%. As the nearby chart shows, corporate receipts over the last 30 years fell during recessions but rose again during expansions. The real story is how consistently revenues have stayed between 2% and 2.5% of GDP. 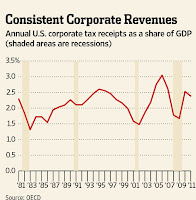 Current U.K. corporate tax receipts are slightly below their long-term average as a share of GDP, likely reflecting a weaker recovery. Across the OECD, corporate-tax revenue has fluctuated between 2% and 3% of GDP and was 2.7% in 2011, the most recent year for published OECD data.

In other words, for all the huffing and puffing, there is no crisis of corporate tax collection. The deficits across the developed world are the product of slow economic growth and overspending, not tax evasion. But none of this has stopped the OECD from offering its 15-point plan to increase the cost and complexity of complying with corporate-tax rules.

The OECD says its goal is to increase "transparency," avoid "a race to the bottom," ensure that reported profits are "in line with value creation," and more. To this end, the OECD wants to "develop rules to prevent BEPS by moving intangibles among group members"; "rules to prevent BEPS by transferring risks among, or allocating excessive capital to, group members"; and rules to "require taxpayers to disclose their aggressive tax planning arrangements."

In other words, this will be another full employment opportunity for lawyers and accountants. While professing that tax policy will still be set by national governments, the OECD plan also envisions a possible multinational treaty to combat the fictional plague of tax avoidance. This would merely be an opportunity for big countries with uncompetitive tax rates (the U.S., France and Japan) to squeeze smaller countries that use low rates to attract investment and jobs....

The G-20 finance ministers endorsed the OECD scheme on the weekend, and heads of government are due to take it up in St. Petersburg in early September. But if growth is their priority, as they keep saying it is, they'll toss out this complex global revenue grab in favor of low rates, territorial taxes and simplicity. Every page of the OECD's plan points in the opposite direction." via Lucianne