"The Renewable Fuels Standard — that oh so ingenious method of creating a fake market for a not-green, not-clean, food-price-spiking, special-interest-serving and overall terrible product — requires that the nation’s refiners blend an ever-increasing volume of specified and so-called biofuels into the fuel supply. Refiners, however, are insisting that we’re now getting to a point at which mixing the required volumes will exceed the 10 percent ethanol threshold they find acceptable for use in cars and trucks, a.k.a. hitting the “blend wall.” Refiners that don’t manage to achieve the mandated volume of biofuels are required to purchase credits (RINs), and heightened demand for the credits is steadily pushing up their prices as the “blend wall” gets closer:

"The price of US ethanol credits has notched a new high as oil companies scramble to comply with a biofuels mandate that Washington has given no hint of easing.

The small, illiquid market has surged more than 2,300 per cent this year as petrol refiners and importers fear scarce future stocks of the credits.

The credits, known as renewable identification numbers, jumped to a record $1.25 per gallon early on Monday, surpassing previous levels reached in March, according to Starfuels, a broker. …

The US Environmental Protection Agency, which administers the mandate, has said it plans to announce targets for ethanol consumption this summer."

And you can count on the EPA planning to hike up the mandate still further — seeing as how they’ve been known to not only model some of those requirements after their completely fanciful projection models for cellulosic biofuels that aren’t actually commercially available in the required amounts, but to then try to penalize companies for not complying. …And then raise those requirements for said non-existent biofuels, again. Yes, this is real life.

And while they definitely do not constitute a complete reason for the rise in gasoline prices, these mandated credits are definitely a factor in prices at the pump.

"A leading U.S. oil executive urged legislators on Tuesday to relax a requirement to use renewable fuel in gasoline, blaming an “out of control” market in biofuel credits known as RINs for adding to fuel costs in a recent run-up in gasoline prices.

At a Senate Energy Committee hearing, lawmakers sought answers for why a surge in domestic crude oil production to the highest level in over two decades had failed to bring down fuel prices. Average U.S. gasoline rates jumped 15 cents over the past week to $3.64 a gallon on Monday, data showed.
Oil refiner Valero Energy Corp Chief Executive Bill Klesse said the government’s renewable fuel mandate is affecting prices in the refined fuel market, repeating a long-standing source of aggravation for the energy industry. …

“The thing the government can do is to get a hold of RINs,” Klesse said. “RINs are out of control.”"

April 2013, "The Trouble with Biofuels: Costs and Consequences of Expanding Biofuel Use in the United Kingdom," ChathamHouse.org, Rob Bailey
.
p. 6, "Increase in US corn ethanol use

The shift to ethanol in recent reporting periods can in part be attributed to the high availability of US corn ethanol in international markets."...

Big banks love ethanol, say it's a matter of

'national security' to them:

9/5/12, “Bankers: Ethanol at heart of corn, farm
pricing structure,” Reuters
.
“The facts, they say, show that ethanol is now bolted
on to the core of three huge industries: energy, meat
and banking....

"Corn ethanol gets just about everything wrong: it increases emissions, it starves the world’s poor, it isn’t efficient, and it drains billions of taxpayer dollars in subsidies. As it turns out, it might also be responsible for last year’s violent labor protests in South Africa and food protests in Haiti and Argentina. The story was covered here at The American Interest last October, but on Monday Real Clear Energy gave a nice summary touching on the correlation between food prices and civil unrest...
.
"The UN urged the US to cut its ethanol mandates last August to help ease spiking world food prices....If not for the sake of emissions, efficiency, or the world’s starving poor, then for a more stable geopolitical landscape."...
.
===========================

“Ban Ki-moon speaks out amid global food shortage, 33 countries facing unrest as families go hungry”
“The UN’s own special rapporteur on the right to food, Jean Ziegler,
called biofuels “a crime against humanity”,

and called for a five-year moratorium….

The UN secretary-general, Ban Ki-moon, has called for a comprehensive review of the policy on biofuels as a crisis in global food prices – partly caused by the increasing use of crops for energy generation -
threatens to trigger global instability.”…
.
==========================

Biofuels have driven up global food prices by 75%:
7/4/2008, “Biofuels May Be Even Worse than First Thought,” Der Spiegel

“Biofuels have driven up global food prices by 75 percent, according to the Guardian report, accounting for more than half of the 140 percent jump in price since 2002 of the food examined by the study. The paper claims that the report, completed in April, was not made public in order to avoid embarrassing US President George W. Bush….

Even Mayor Bloomberg who has financial interests in the CO2 terror industry says ethanol causes people to starve to death (translation: ethanol is genocide).

.
"A new U.S. energy law will cause an increase in global food prices and lead to starvation deaths worldwide because it continues to promote corn ethanol, New York Mayor Michael Bloomberg said on Monday.

after addressing a U.N. General Assembly debate on climate change."...

“The Obama administration on Friday rebuffed requests by Texas Gov. Rick Perry and the leaders of several other states to waive a federal renewable fuel mandate that requires ethanol to be blended into the nation’s gasoline supply.

In rejecting the waiver requests, the Environmental Protection Agency effectively disagreed with the states’ concerns that the mandate was spiking corn demand and prices following a drought that devastated crops in the Midwest. The EPA concluded the Renewable Fuel Standard would not cause “severe economic harm” to states and regions."...

Al Gore said he lied about the efficacy of corn ethanol in an attempt to get elected president:

8/9/12, "Easing US ethanol mandate would help prevent food crisis-UN," Reuters
.
"Global pressure on the United States to relax its ethanol quota mounted on Thursday as the top World Bank food official said an "immediate, temporary suspension" of the mandate could help head off another world food crisis."...

"It takes about 1,700 gallons of water to produce one gallon of ethanol. Each acre of corn requires 130 pounds of nitrogen and 55 pounds of phosphorous. Increased acreage means increased agricultural runoff that is creating aquatic "dead zones" in our rivers, bays and coastal areas."... 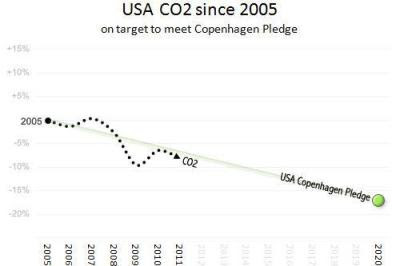 “Not only that, but as my top chart shows, US CO2 emissions are falling even faster than what President Obama pledged in the global Copenhagen Accord.…

Here is the biggest shocker of all: the average American’s CO2 emissions are down to levels not seen since 1964 --over half a century ago. …Coal is the number two source of CO2 for Americans. Today the average American burns an amount similar to what they did in 1955, and even less than they did in the 1940s. …It is exactly America’s historical role of biggest and dirtiest that makes their sharp decline in CO2 pollution so noteworthy and potentially game changing at the global level.”...


Global warming pause, Der Spiegel, Jan. 2013: .
.
1/18/13, “Climate change: scientists puzzle over halt in global warming,” Der Spiegel, by Axel Bojanowski (translation from German by google)
.
“How much our climate is warming real? NASA researchers have shown that the temperature rise in 15 years takes a break. At the same time, there are indications that shifts the problem: The environment could be a completely different place preliminary heat….

“The stalemate has led to the suggestion that global warming had stopped,” admits the Nasa.

The British Met Office forecast even more recently that the temperature interval could continue at a high level until the end of 2017 - despite the rapid increase in greenhouse gas emissions . Then global warming would pause 20 years. How many years, this is a now common question, because the temperature would still falter, climate scientists to rethink their forecasts of future warming?…Scientists previously thought, fourteen years without further warming were to bring into line with their forecasts – but not “15 years or more,” as NASA scientists four years ago in the journal “Bulletin of the American Meteorological Society” konstatierten . A renowned scientist wrote on 7 May 2009 in an e-mail to colleagues, as the heating pause had lasted eleven years: “The non-trend [of temperatures] would take 15 years before we need to worry about [our results].”

15 years without warming the air near the ground is now over. The stalemate in the average temperature shows that the uncertainties of climate predictions are surprisingly large.”…

Comment: Ethanol is genocide. If murder is a crime, those who promote ethanol should be arrested and jailed.