"Lower-paying jobs have been growing faster on Long Island than better wage occupations during the economic recovery, while manufacturing and public-sector work -- long a mainstay for the middle class -- are losing ground. 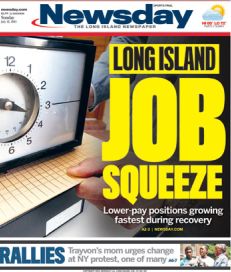 Though the post-recession unemployment rate on Long Island dropped to 6.1 percent in May from a recession-caused peak of 8.3 percent in February 2010, "the strongest growth has been in industries paying below-average wages," said New York State Labor Department analyst Jim Brown.

The May figures showed the trend continuing, with 6,300 fewer jobs in manufacturing and government, such as public school teaching, compared with a year earlier. But there were boosts in leisure and hospitality (7,000), and retail (6,200.)

For many Long Islanders, the trend is reflected in having to work multiple jobs or to struggle to meet expenses on part-time work in a region where -- according to the Economic Policy Institute, a Washington think tank -- families of four need an income above $90,000 to live in modest financial security.

Don Krauss, 53, of Lindenhurst, lost his full-time job as a mechanic in a diesel engine repair shop in 2011.

Since then, he's cobbled together two part-time jobs, one at Home Depot in Farmingdale and another as an usher at a funeral home. That worked as long as his wife did, but she recently lost a job too.

Now, he said, they will have trouble paying their $3,000-a-month mortgage. They plan to move upstate. "I'm looking to move out of here as soon as I can," he said.

Employment statistics show why it's become harder for many Long Islanders to keep up:

On the Island, the greatest job loss between 2000 and 2012 was in manufacturing: 30,000 jobs gone that tended to pay above-average wages, said Michael Crowell, senior economist at the state Labor Department's Long Island office. Leisure and hospitality in Nassau and Suffolk counties, which includes hotels and restaurants, "has grown by close to 22,000 jobs, and that is the lowest-paying sector on Long Island."

Health care and professional and technical services showed strength, with their mix of higher-paying and low-wage jobs. Construction, after lagging for some years, gained the last two years.
Nationally, the biggest surge in jobs in recent months has come in part-time employment: national statistics showed

Of the record 28 million people around the United States now holding part-time jobs, 8.2 million do so because their hours were cut or they couldn't find full-time work, according to the U.S. Bureau of Labor Statistics.

Wages failed to keep up with inflation in six of the 10 lowest-paying occupational categories on Long Island between 2000 and 2012, according to state Labor Department statistics. For many in the lower-wage categories, the 40-hour workweek is a relic.

Alex Arias, 43, of North Babylon, said he puts in up to 70 hours per week at three jobs with no benefits beyond three paid personal days. He works up to 40 hours a week during the school year as a middle-school substitute teacher, but is a per-diem employee, not a staff member.

Arias spends 20 hours a week as a sales associate at Staples and another 10 hours as an assistant kitchen manager at a Sonic fast-food restaurant.

The plight of workers unable to land a traditional full-time job with benefits is discouraging, he said. "You work so hard, and you kind of feel you're not getting a lot in return," he said. "You have to work 40 hours to get benefits, and they'll give you 38."

Meanwhile, he said, he has student loans coming due in December. He said he pays the mortgage and taxes on the house he shares with his ailing mother. He went back to school to obtain a master's in special education but found few job openings.

Marvelyn Stanley, 47, of Hempstead, has two full-time jobs for a combined $67,000 while her husband works full time as a truck tire mechanic. He hasn't gotten a raise in five years, she said. She works from 7 a.m. to 3 p.m. as an aide in a nursing home, and from 3:30 p.m. to 11 p.m. giving direct care to disabled group home residents. Each job is five days a week.

Some working people find they can't make it without help.

A home health aide went to the Selden Centereach Youth Association's Helping Hand food pantry a few weeks ago to sign up for a disabled client -- and herself.

Pantry workers said they see a lot of people with jobs coming there for free food -- bread and cereal and, if they're lucky, a frozen chicken.

"The majority of our clients are working poor," said Joy Meyer-Buckley, manager at the pantry. "Some of the people are working full time. Some are working two part-time jobs."

Karen Boorshtein, president of the Family Service League, a social service agency with 15 Long Island locations, said there's been a change in the typical client seeking assistance or counseling.

"What we've seen are very middle-class families where one or both husband and wife lost a job, or had to take a lower-paying job and they find that they are having difficulties paying their bills. . . .

Having to work two and three jobs to make enough money, it's not the exception anymore the way it used to be."

One job just not enough

A 38-year-old father of two from West Babylon who asked to be identified only by his first name, Frank, said he works a 72- to 80-hour week, seven days a week. He has a full-time job at the counter of a plumbing supply business and works part-time at Home Depot.

"I'm done if I work 40 hours. I can't live off that," he said. "I barely make it working seven days. I went three or four months without a day off."

Frank said his wife is now looking for work around their children's school schedule: "There's only a handful of jobs she can go for, and every mom is going for them," he added.

Customers interviewed in the parking lot of a big-box store in East Meadow said they have jobs that don't pay enough to live on comfortably.

Most didn't want their full names used, like Frank, 28, who said he worked 60 to 70 hours a week as a restaurant manager and hadn't had a raise in four or five years. He can't afford the health insurance plan offered by his employer and lives with his wife and two young children in a one-bedroom apartment in Levittown for $1,500 a month plus utilities.

His children qualify for Medicaid and food stamps. "Otherwise, my income wouldn't be enough for us," he said.

The growth in part-time work has been a long-term trend, rising from about 13 percent of the workforce in 1968 to 19.7 percent in 2013, according to Bureau of Labor Statistics data. Median wages have been stagnating since the 1970s, the data show.

A Walmart spokesman, Kory Lunberg, said that more than 50 percent of the chain's hourly wage workers were full time. He said only some part-timers work a flexible schedule and are told up-front that their hours would fluctuate "depending on the needs of the store."

Newer workers must pass a threshold of 24 to 30 hours a week on average to become eligible for health and other benefits. "We're one of the few retailers to offer benefits to part-time workers," he said.

Part-timers typically get fewer benefits, like health insurance and sick days, than full-timers, or none at all. Critics of industries that rely on low-paid employees say that many are forced to turn to government services such as food stamps and energy and housing assistance.

"People are realizing the taxpayer is going to pay for this," said Patrick Purcell, a spokesman for the United Food and Commercial Workers Union Local 1500 in Westbury, which represents unionized supermarkets and tried, unsuccessfully, to unionize the Target in Valley Stream last year."...image above, Newsday front page, Sun., July 21, 2013

Genocide of the US has taken place. It only required willingness to wait a generation and a bunch of money:

On June 8, 2012,  Bill McKibben spoke at a conference put on by the New Economics Foundation. This Foundation seeks "to achieve social justice globally" (p. 6) by making a 21 hour work week standard. They say economic growth must be reduced to save the planet and increase equality:

"21 Hours," by the New Economics Foundation, "Why a shorter working week can help us all to flourish in the 21st century"

"A ‘normal’ working week of 21 hours could help to address a range of urgent, interlinked problems: overwork, unemployment, over-consumption, high carbon emissions, low well-being, entrenched inequalities, and the lack of time to live sustainably, to care for each other, and simply to enjoy life....

There is thus ‘no credible, socially-just,

"In 1930, John Maynard Keynes imagined that by the beginning of the twenty-first century, the working week could be cut dramatically – not just to 21 hours but to 15 hours. He anticipated that we would no longer need to work long hours to earn enough to satisfy our material needs and our attention would turn instead to ‘how to use freedom from pressing economic cares’.1 Keynes was wrong in his forecast, but not at all wrong, it seems to us, to envisage a very different way of using time."

-to accumulate great wealth
-to live a long and comfortable life
-to be able to influence governments around the world.