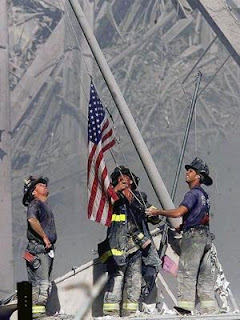 "This iconic picture of firefighters raising the stars and stripes in the rubble of Ground Zero was nearly excluded from the 9/11 Memorial Museum — because it was “rah-rah” American, a new book says.

Michael Shulan, the museum’s creative director, was among staffers who considered the Tom Franklin photograph too kitschy and “rah-rah America,” according to “Battle for Ground Zero” (St. Martin’s Press) by Elizabeth Greenspan, out next month.

“I really believe that the way America will look best, the way we can really do best, is to not be Americans so vigilantly and so vehemently,” Shulan said."...image 2001, by ap, "Iconic Ground Zero image was seen as too “vehemently” American by some 9/11 Museum staffers," NY Post caption