Update: $17 million has been raised by Fake photo. Fake News works, crying Honduras girl on Time Mag cover was never separated from her mother and both are fine. But fake photo got Trump to "back down." Father has a good job in Honduras. Mother abandoned her 3 other young children and gave herself and her baby to smugglers-Daily Mail...(Because of fake photo, Trump "had no choice" so "backed down")

.
"The photo was used on a Facebook fundraiser that drew more than $17 million dollars in donations from close to half a million people for the Refugee and Immigrant Center for Education and Legal Services (RAICES)" providing lawyers for anyone from outside the US who along with the US political class wants to laugh in the face of innocent US taxpayers.
.................

The “American dream” is now defined as abandoning your husband (who has a good job) and 3 of your 4 children without notice, putting your child in grave danger and emerging weeks later in the US as a single mother knowing that the "caring" US political class loves handing out billions in free cash off the backs of US taxpayers:

6/21/18, “EXCLUSIVE: ‘They’re together and they’re safe.’ Father of Honduran two-year-old who became the face of the family separation crisis when she was photographed in tears as her mother was searched by U.S. border control speaks out,” Daily Mail, Daniel Bates, Karen Ruiz 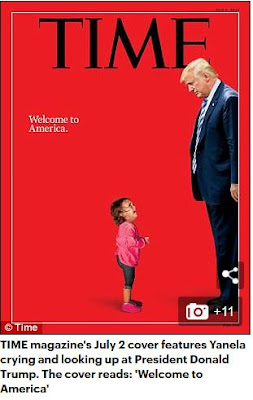 “The father of the Honduran girl who became the face of the [alleged] family separation crisis has revealed that he still has not been in touch with his wife or daughter but was happy to learn they are safe.

Denis Javier Varela Hernandez, 32, said that he had not heard from his wife Sandra, 32, who was with his two-year-old daughter Yanela Denise, for nearly three weeks until he saw the image of them being apprehended in Texas.

In an exclusive interview with DailyMail.com, Hernandez, who lives in Puerto Cortes, Honduras, says that he was told yesterday that his wife and child are being detained at a family residential center in Texas but are together and are doing ‘fine.’

‘You can imagine how I felt when I saw that photo of my daughter. It broke my heart. It’s difficult as a father to see that, but I know now that they are not in danger. They are safer now than when they were making that journey to the border,’ he said.

Denis said his wife and daughter were never separated by border control agents and remain together.

Two-year-old Yanela, a Honduran asylum seeker, has become the face of the child separation crisis after she was photographed crying in McAllen, Texas, as Border Control agents searched her mother.

He revealed that his wife had previously mentioned her wish to go to the United States for a ‘better future‘ but did not tell him nor any of their family members that she was planning to make the trek.

‘I didn’t support it. I asked her, why? Why would she want to put our little girl through that? But it was her decision at the end of the day.’

He said that Sandra had always wanted to experience ‘the American dream’ and hoped to find a good job in the States.

Denis, who works as a captain at a port on the coast of Puerto Cortes, explained that things back home were fine but not great, and that his wife was seeking political asylum.

He said that Sandra set out on the 1,800-mile journey with the baby girl on June 3, at 6am, and he has not heard from her since.

‘I never got the chance to say goodbye to my daughter and now all I can do is wait’, he said, adding that he hopes they are either granted political asylum or are sent back home.

‘I don’t have any resentment for my wife, but I do think it was irresponsible of her to take the baby with her in her arms because we don’t know what could happen.’

The couple has three other children, son Wesly, 14, and daughters Cindy, 11, and Brianna, six.

‘The kids see what’s happening. They’re a little worried but I don’t try to bring it up that much. They know their mother and sister are safe now.’

Denis said that he believes the journey across the border is only worth it to some degree, and admits that it’s not something he would ever consider.

He said he heard from friends that his wife paid $6,000 for a coyote – a term for someone who smuggles people across the border.

The [fake] heart-breaking photo [used falsely to demonize innocent Americans] was taken by Getty photographer John Moore close to midnight on the night of June 12 near McAllen, Texas, as the row over Donald Trump’s separation of migrant parents and children escalated.

Denis said that he hopes to use the photo and his family’s situation to help him reunite with his daughter.

‘I don’t want money, what I want is someone to tell me that my daughter is going to be OK.’

When asked about his views on Trump’s border policy, Denis said: ‘I’ve never seen it in a positive light the way others do. It violates human rights and children’s rights. Separating children from their parents is just wrong. They are suffering and are traumatized.

‘The laws need to be modified and we need to have a conversation. It’s just not right.”…

[Ed. note: “We” need to have a conversation? US “laws need to be modified?” Pal, look at yourself. Your wife leaves home with one of your children without telling you or her 3 other young children, takes your baby on a life threatening trip with rapists to a distant country, and you think the United States has to have a conversation with you about anything and change its laws? Your attitude exemplifies the accepted notion that US taxpayers are global slaves, that the US no longer exists except as a slave barracks for US taxpayers.]

(continuing): “‘[Illegal] Immigration and drug smuggling across the United States border is never gonna stop. They can build a wall and it’s never going to stop,’ he said.”…

[Ed. note: So, no debate, it's inevitable, Americans should just accept that we're global slaves.]

(continuing): “Hernandez’s wife was part of a group that were caught by Border Patrol agents after making their way across the Rio Grande river on a raft. Hernandez said that he had heard through family members that his wife and daughter had not actually been separated.

[Photographer] Moore’s photo showed Yanela crying on a dirt track as her mother [standing nearby] is patted down by a Border Patrol agent.

For many the [intentionally falsely portrayed] photo summed up the cruelty of Trump’s ‘zero tolerance’ policy towards migrants which has [allegedly] caused 2,300 children to be separated from their mothers and fathers.

He [Moore] said that Yanela is the youngest of four children and she was the only one that traveled with her mother, a decision that surprised him.

‘As a father [Moore said], it was very emotional for me just to hear those cries. When I saw this little girl break down in tears I wanted to comfort this child."...

[Ed. note: As an American, it's very emotional for me to be intentionally defamed and libeled for the purpose of advancing the multi-trillion dollar open borders industry, ie including the elimination of US borders, meaning genocide. This Getty "photojournalist" was at the border for the purpose of getting publicity for his employer. His burst of "emotion" wanting "to comfort this child" is irrelevant. The fact is that the photo was intentionally misrepresented to increase the likelihood that more American children will go hungry and lose other basics their parents thought they worked to give them. This photo will increase the likelihood that billions more taxpayer dollars will be funneled to the criminal refugee racket. Never once is the comfort of American children taken into account. Never once does anyone suggest having a "heart" for Americans. Never once does anyone suggest the president of Honduras should have a "heart" and treat his citizens better.]

(continuing): "‘But as a photojournalist we sometimes have to keep photographing when things are hard. And tell a story that people would never see.'”…

[Ed. Note: “Tell a story?” So now telling a lie is the same as "telling a story"?  If a photo is used to harm a single individual it's actionable.]

(continuing): “Moore crouched 6ft from the girl as she looked up at her mother and took seven shots, Yanela’s mother’s hands spread out on the Border Patrol truck.

The image was a major factor in pressuring President Donald Trump to do a U-turn on his immigration policy and sign an executive order allowing families to stay together.

The President said that he wanted to look strong but admitted that the ‘zero tolerance’ policy made him look like he had 'no heart.'

Trump’s climb down came after worldwide outrage including British Prime Minister Theresa May who called his policy ‘deeply disturbing’ while Pope Francis said it was ‘immoral’.

The climb down was a rare one from Trump, who almost never apologizes and rarely backs down.

But he had no choice when his policy created a wall of opposition between him and others, including his own wife Melania, Democrats, Republicans, every living former First Lady, Amnesty International and the United Nations.”