.
12/7/15, "'We have no choice': Donald Trump touts his plan to stop Muslims from entering the US," Business, Insider, Colin Campbell

"Real-estate mogul Donald Trump rallied his supporters on Monday night behind his proposal to bar all Muslims from entering the US for the time being.

The GOP front-runner's plan was fiercely criticized by even his fellow Republicans within hours of its release earlier in the day.

But Trump insisted that it was "common sense."

He went on to tout a June survey of American Muslims that was criticized by The Washington Post as a "very shoddy poll." "...

[Ed. note: A different poll, Pew Poll, Aug. 30, 2011, reports on page 7, "just" 19% of Muslims living in the US (as of 2015 estimated at 583,300 by the most conservative extrapolation of 2011 Pew population data) agree that "suicide bombing/other violence against civilians is justified to defend Islam from its enemies" in some cases. (See chart at end of this post). Pew doesn't state this directly, rather it observes that "fully 81%" think violence is never justified. Pew headlines its chart, "Large Majority Continues to Reject Suicide Bombing." Full article, 8/30/2011,"Muslim Americans: No Signs of Growth in Alienation or Support for Extremism," Pew Research, people-press.org.]

Trump said his hard-line proposal was for a "total and complete shutdown of Muslims entering the United States" until "our country's representatives can figure out what the hell is going on."

Trump campaign manager Corey Lewandowski told The Associated Press that the proposal would apply to "everybody," including Muslim tourists and people seeking immigration visas. Trump issued the plan in the wake of last week's mass shooting in San Bernardino, California, where the suspects allegedly "self-radicalized."

Speaking at his Monday rally, Trump warned that without an aggressive response to terrorism, there would be more incidents like the September 11, 2001, World Trade Center attacks.

He continued: "They have no respect for human life. So we have to do something.""

Added: Additional citation from Pew Poll referenced in my note/comment above: 8/30/2011,"Muslim Americans: No Signs of Growth in Alienation or Support for Extremism," Pew Research, people-press.org.

On page one, Pew enthuses: "Fully 81% say that suicide bombing and other forms of violence against civilians are never justified." (subhead, "Support for Extremism Remains Negligible.") Pew makes no comment that therefore 19% of US Muslims do approve violence in some cases.

Page 2, subhead, "Number of Muslims in the US," Pew estimated in 2011 that 2.75 million Muslims lived in the US. Using their data, this meant that 522,500 (19%) agreed that "suicide bombing/other violence" are justified in some cases to defend Islam. 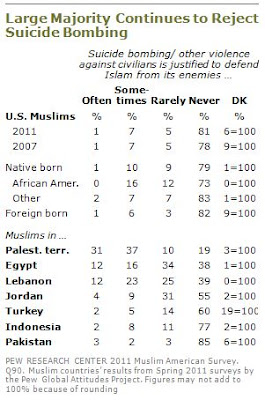 subhead, "Number of Muslims in the US"

The 2011 population estimate also roughly accords with separate projections made last year by the Pew Forum’s “The Future of the Global Muslim Population.” For that report, demographers at the International Institute for Applied Systems Analysis (IIASA) in Austria independently estimated the total U.S. Muslim population at about 2.6 million in 2010. The same report also estimated that about 80,000 to 90,000 new Muslim immigrants have been entering the United States annually in recent years.

How the estimate was made

Prior to Pew Research Center’s 2007 survey, no estimate for the Muslim American population, based on widely accepted social scientific methods, was available. Gauging the number of Muslims living in the United States is difficult because the U.S. Census Bureau, as a matter of policy, does not ask Americans about their religion. Nor do U.S. immigration authorities keep track of the religious affiliation of new immigrants. Both the Census Bureau and immigration authorities do collect statistics, however, on people’s country of birth....

For example, interviewing used to identify Muslim respondents for the Pew Research Center’s 2011 Muslim American survey (which screened more than 43,000 households, including non-Muslims) finds that 87% of people living in the U.S. who were born in Pakistan, Bangladesh or Yemen are Muslim."...