.
Unfortunately, US part time economy of Nov. 2015 was broadly mischaracterized as full time economic growth and therefore proof that Fed could hike rates.

"On the surface, the December jobs number was better than expected, adding a 211,000 jobs at least according to the Establishment survey. However, a less pretty picture emerges when looking at the Household survey, and specifically the composition of full-time vs part-time workers.

This is what the BLS said about the composition of job additions from the Household Survey:


"The number of persons employed part time for economic reasons (sometimes referred to as involuntary part-time workers) increased by 319,000 to 6.1 million in November, following declines in September and October."
For those unfamiliar, this is a category of workers that includes "individuals, who would have preferred full-time employment, were working part time because their hours had been cut back or because they were unable to find a full-time job."

As such this includes far more than merely workers hired on a temporary basis by retailers to fill seasonal worker needs.

Furthermore, this 319K increase in part-timers for economic reasons more than accounts for the total increase in employed workers according to the Household survey, which rose by 244K to 149,364,000.

Charted, it shows that the November jump was the highest since September 2012. 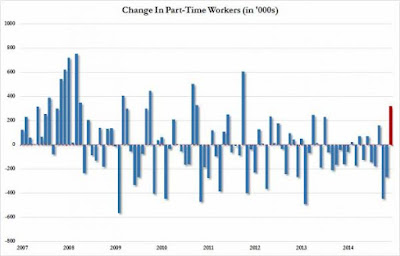 Elsewhere, according to the Establishment survey, the breakdown in job additions in November was as follows: in the front inexplicably we had construction workers, which paradoxically comes at a time when recent US housing data has taken a turn for the worse as reported previously. It is followed by the traditional low paying jobs of education and health, professional services, leisure and hospitality, and retailers. High paying jobs such as manufacturing, mining and logging and information all saw a decline in the month." Chart from Zero Hedge [The Zero Hedge chart above doesn't state the source of data. I'm guessing it's BLS data, but I don't have time to check on it right now. Susan]

"Broadly interpreted by economists as the sufficient condition for the Fed to hike rates"...

12/5/15, "326,000 Native-Born Americans Lost Their Job In November: Why This Remains The Most Important Jobs Chart," Zero Hedge, Durden

"Friday's release of a "just right" jobs report, in which the US economy reportedly added 211,000 jobs, more than the 200,000 expected, solidified its position as the "most important" one in recent years, after it was broadly interpreted by economists as the sufficient condition for the Fed to hike rates on December 16, 7 years to the day after the same Fed cut rates to zero....

The fawning mainstream media only noted, in passing, one negative aspect to the report: the fact that 319,000 part-time jobs for economic reasons were added in November."...

Email ThisBlogThis!Share to TwitterShare to FacebookShare to Pinterest
Labels: Nov. 2015. no one bragging about deadly part time US job numbers