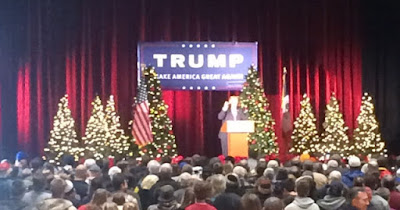 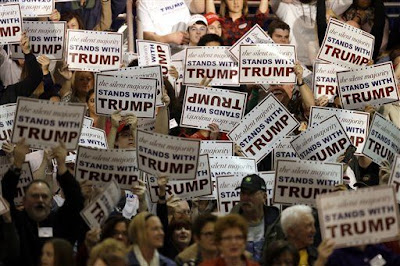 "Johnson said she did not think she would vote if Trump is not on the ballot."

"“We want to win Iowa so bad because if we win Iowa, I think we run the table, I really do,” Trump told about 2,000 cheering Iowans who packed the Varied Industries Building at the Iowa State Fairgrounds.

“If I win Iowa, I think it’s over,” said the New York entrepreneur, who plans to be in the lead-off state “a lot” in January and on caucus day. “I love you people, remember that,” he told rally attendees, many of whom waved signs bearing the message “The silent majority stands with Trump” and wore red “Make America Great Again” caps....

In the wake of terrorist attacks in Paris and San Bernardino, Calif., Trump modified his theme by saying he wants to “make America great and safe again.”...

Mary Johnson of Norwalk, who came with her husband, Rick, and son, Alex, to hear Trump speak, said she planned to caucus for him Feb. 1.

“I think Trump’s got it right,” she said, noting she has attended two political rallies in her lifetime — both Trump events this year. “I think the whole politically correct stuff — he’s thrown it out the window, and he’s been real and that’s what I like. I don’t feel like he’s telling me what he thinks I want to hear. It sounds like he’s honest.”

Johnson said she did not think she would vote if Trump is not on the ballot. Asked if she thought Trump would make a good president, she said “I don’t think that he can do any worse than what we have.”"...