"When Obama’s motorcade rocketed around San Francisco on Monday, very few locals even noticed his presence, and fewer still cared. The crowds awaiting him at each presidential fundraiser were by far the smallest I’d seen in over five years of covering his visits here. Ticket sales to at least one of the events were so sluggish that prices had to be lowered to fill the empty seats. Out in the street, rubberneckers and protesters had dwindled to the bare minimum. This is what happens when a hero disappoints: you don’t turn on him in anger, but rather just tune him out and move on to other interests.

Yet even with the small turnout, there was a theme amongst Obama’s protesters/supporters (supportesters?): They didn’t want him to change his political agenda — instead, they demanded that he assume dictatorial powers so that he could finally implement the radical plans with which they already agree. The message of the day was: Stop dilly-dallying around, Mr. President: Ignore the Constitution and just make The Revolution happen, as you promised!...

Obama’s first fundraiser of the day was at the Betty Ong Recreation Center, on the edge of San Francisco’s Chinatown. To deflect the constant criticism that he merely treats the city as a big ATM machine, this time he decided to give one “substantive” speech during the visit, on the topic of immigration. About 40 immigration activists showed up to — well, “protest” isn’t really the right word. ...

Someone in the audience began heckling Obama to use “executive orders” to push the progressive agenda through — and once again Obama patiently explained to his most ardent fans that he just can’t do that, as much as they might want him to:


“Somebody keeps on yelling, ‘executive order,’” Obama said. “I’m going to actually pause on this issue because a lot of people have been saying this lately on every problem, which is just, ‘Sign an executive order and we can pretty much do anything and basically nullify Congress.’” When people started applauding, Obama said, “Wait, wait, wait. Before everybody starts clapping, that’s not how it works. We’ve got this Constitution, we’ve got this whole thing about separation of powers. So there is no short-cut to politics, and there’s no short-cut to democracy. We have to win on the merits of the argument with the American people, as laborious as it seems sometimes.”

Critics online immediately pounced on Obama’s claims of political impotence, pointing out that he has indeed repeatedly used executive orders to bypass the will of Congress, something he now says is unconstitutional....

Outside was a slightly larger cluster of our old buddies, the anti-Keystone Pipeline activists who have tailed Obama at every public event for the last two years. 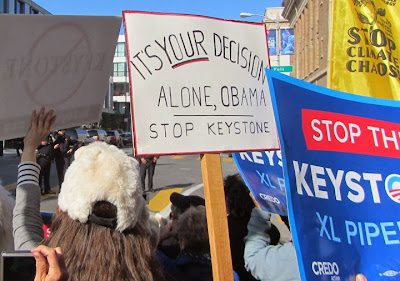 But here too the protesters, who were in essential agreement with Obama on every issue, had one demand: That Obama “alone” set national energy policy, bypassing Congress, the democratic process, and the will of the people. Just like the immigration activists at the first fundraiser, and just like the hecklers at both events, these supportesters were frustrated that Obama hasn’t yet fully enacted all of his promised radical agenda via standard constitutional methods, so their proposed solution is for him to start ruling by decree — or “executive order” as it’s called, to make it sound more palatable.

But here’s the thing: as I noted during an earlier Obama visit to San Francisco, the anti-Keystone “protesters” are not opposed to his agenda — they are in fact part of his agenda, bit players in the White House’s endless political theater, giving him cover to make unpopular decisions, citing public opinion (as evidenced by these ginned-up “protests”) to justify his one-sided actions:


This explains how people who voted for Obama can be out in the street seemingly to protest “against” him. Turns out this whole protest was nothing more than play-acting for the cameras, a group of faux protesters colluding with Obama to create a Potemkin “movement” which he can then cite as justification for making an unpopular decision he already wanted to make anyway. “I had no choice — there’s a mass movement against this pipeline! I must bow to the will of the people.”

I find it very disturbing that actual grassroots protesters would be willing to dispense with the U.S. Constitution and welcome a dictatorship simply in order to get their way on this or that specific political issue. (It might seem like a good idea at first, but that way lies tyranny.) Yet I find it even more disturbing that the Obama administration could be astroturfing (as in the case of the heckler) or at a minimum encouraging and facilitating (as with the anti-Keystone activists) the very “protesters” who call on him to assume totalitarian powers."...images by the Great Zombie 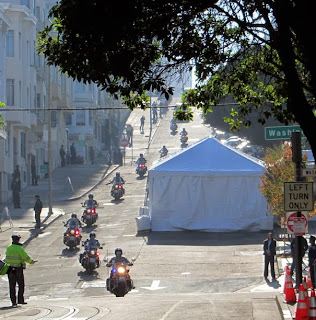