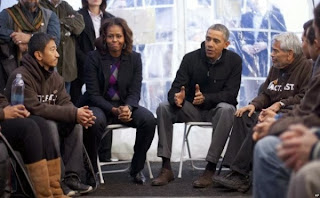 "President Barack Obama, today visited the activists are on hunger strike at the Mall in Washington to call for comprehensive immigration reform in the country and said he approved " proud "of them. Accompanied by his wife, Michelle Obama, the president moved in this morning from the White House to the Capitol where near PRODERECHOS migrant activists are camped without food since last 12th gardens.
Obama and first lady moved their support to Eliseo Medina, a member of the International Union of Service Workers (SEIU, in English), who has lost about 10 kilos and is visibly thinner than when you started, as well as Dae Joong Yoon , director of the National Consortium Korean American Service and Education....

In stores have accumulated messages of support, pictures of Gandhi and Cesar Chavez (American peasant leader) and have built a small altar to the Virgin of Guadalupe to pray and ask the politicians who work a few meters from the camp understand the importance of regularize the situation of separated families or people who work and are treated as second class citizens."...image above via El Nuevo Diario