GOP fakes, you just stay with those 'rebranding' focus grps. while neglecting and tripping over diamonds at your feet such as Chicago's Paul McKinley-Sorock 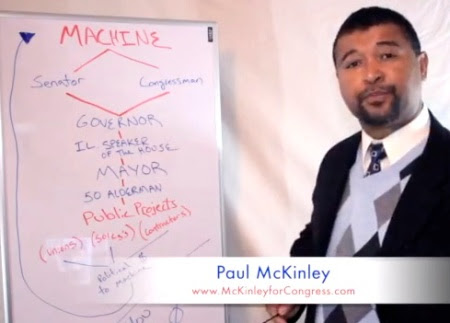 "We at LI know what’s groundbreaking: not a superficial hire at the RNC but a candidate like Paul McKinley who’s carrying the load of the tired Republican brand into his community and rejuvenating it. His complete non-support, and in the case of the Illinois GOP, downright abandonment, by the Republican powers-that-be is worth studying more than this entire report’s “findings” on African American outreach.

Wake up, RNC. There’s a revolution going on and your brand isn’t going to stick around with recommendations like “hire some of the minorities.” This ought to be a party about ideas, ideas that you seem to have forgotten are more important than embracing the left’s separation of our American populace into demographic interest groups. You don’t need focus groups, you need a complete cleaning of house."

"Paul McKinley, (is) the Republican running in the special election to replace Congressman Jesse Jackson, Jr....The Republican establishment is ignoring the voters’ choice, instead giving a less than welcoming reception to McKinley."...

commenter to above entry:

The “Republican” establishment in Chicago is as much a branch of the Mafia as the Democrats are. They are there to provide weak candidates for the Democrats to crush. And they don’t support them, either."

“In his victory, (Paul) McKinley more than doubled his closest Republican opponent’s votes in the poorer urban south side of Chicago, a news story in and of itself, as the conservative message reached areas that had never embraced Republicans before.…It was McKinley’s campaign message against “The Machine” that resonated with voters across the Second District.”…(above image, McKinley teaches about the Chicago Machine)

"Paul McKinley never has run from the fact that he is an ex-con. He has been upfront about it, and his story of repentance since he was released in 1998 is part of his narrative of “an ex-offender trying to prevent the next offender” and his willingness to stand up to the Chicago political Machine.

But as mentioned here before, the Chicago media is trying to define McKinley’s candidacy as unacceptable regardless of what McKinley has done with his life after prison.

McKinley, for his part, lets it roll off his back; but in his latest video he strikes back at the Media’s attacks....

McKinley reports his campaign has been flooded with donations from across the country–and from readers of this site. He has heard from ex-cons who, like him, have turned their lives around and see themselves in him.

The Republican voters of the Second District have been unrelenting in their support, and according to McKinley, he has a message that is resonating across the diverse district and reaches those who have never considered a Republican before.

Something special is happening in this special election."

“Every 7½ minutes there was a commercial.”

Bloomberg’s Independence USA spent more than $2 million to defeat Halvorson, a former congresswoman who ran with a strategy criticizing corruption in Chicagoland politics. The PAC attacked Halvorson with both television ads and mailers.

“We all know how rough it was for me to have to run an election against someone who spent ($2.2) million against me,” Halvorson told supporters after losing the race. “Every 7½ minutes there was a commercial.”