"Just the headlines for now:

Thank you NAR for proving what everyone knew: that the US housing market is one big lie. And next: here come the historical GDP revisions.

The three charts that matter: 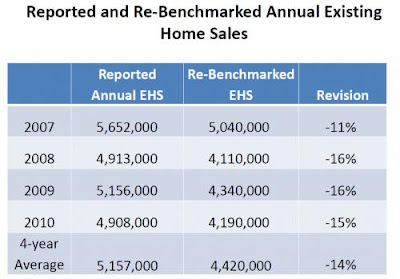 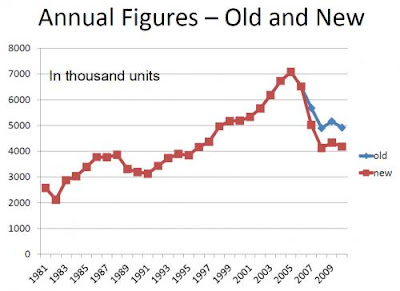 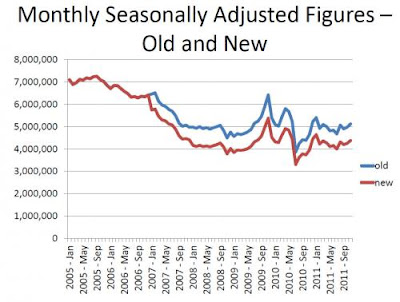 And the reasons for the "rebenchmarking:"

Odd: no mention of the primary reason for the "rebenchmarking", namely that the NAR is nothing but an advertising front for the US housing industry."

When I read the post about how we can’t trust anyone’s numbers, I recalled this quote from Vaclav Havel, first seen at smalldeadanimals. He was writing about Communist regimes, but why do I feel he’s writing about us when I read it? (emphasis mine)

The post-totalitarian system touches people at every step, but it does so with its ideological gloves on. This is why life in the system is so thoroughly permeated with hypocrisy and lies: government by bureaucracy is called popular government; the working class is enslaved in the name of the working class; the complete degradation of the individual is presented as his ultimate liberation; depriving people of information is called making it available; the use of power to manipulate is called the public control of power, and the arbitrary abuse of power is called observing the legal code; the repression of culture is called its development; the expansion of imperial influence is presented as support for the oppressed; the lack of free expression becomes the highest form of freedom; farcical elections become the highest form of democracy; banning independent thought becomes the most scientific of world views; military occupation becomes fraternal assistance. Because the regime is captive to its own lies, it must falsify everything. It falsifies the past. It falsifies the present, and it falsifies the future. It falsifies statistics. It pretends not to possess an omnipotent and unprincipled police apparatus. It pretends to respect human rights. It pretends to persecute no one. It pretends to fear nothing. It pretends to pretend nothing.

It’s all about preference falsification. It helps to have state-controlled media. We aren’t there, but it’s easy to spot the behavior of those who wish we were. That said, the NAR’s data aren’t wrong for the reasons Havel outlines — they’re just the patter of a salesman."