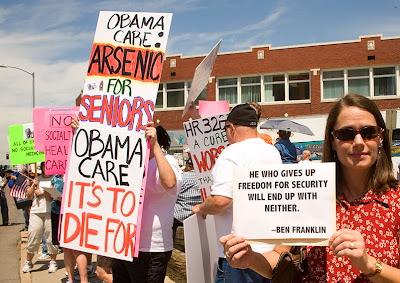 From Looking at the Left, "Nancy and the astroturfers"

8/6/09, "First let’s look at the messages and faces of these hardy dissenters. Take a close look so you can compare them to the community organizers who will soon enter the scene and harass them. These citizens have been described by the Democratic National Committee in an ad as

The Democrat party that funneled billions in the stimulus package to ACORN community organizers to organize, protest and agitate, this same party is now

These protesters told me that they pay their own way and question what the government is attempting to do to their health care." ...