Arizona shooter singled out Giffords 3 years ago. The Tea Party did not exist 3 years ago, Sarah Palin was unknown.

.
1/9/11, "Shooting suspect's nihilism rose with isolation," AP
"At an event roughly three years ago, Rep. Gabrielle Giffords took a question from Jared Loughner, the man accused of trying to assassinate her and killing six other people. According to two of his high school friends the question was essentially this: "What is government if words have no meaning?"

Loughner was angry about her response — she read the question and didn't have much to say....

Loughner had at least one other contact with Giffords. Investigators said they carried out a search warrant at Loughner's home and seized a letter addressed to him from Giffords' congressional stationery in which

Other evidence seized from his home included an envelope from a safe with messages such as "I planned ahead," ''My assassination" and the name "Giffords" next to what appears to be Loughner's signature. Police say he purchased the Glock pistol used in the attack in November.

Loughner lives with his parents about a five-minute drive from the shootings, in a middle-class neighborhood lined with desert landscaping and palm trees. Sheriff's deputies blocked off much of the street Sunday."... 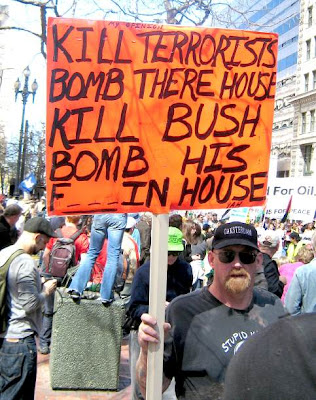 Email ThisBlogThis!Share to TwitterShare to FacebookShare to Pinterest
Labels: Arizona shooter singled out Congresswoman 3 years ago, Tea Party did not exist