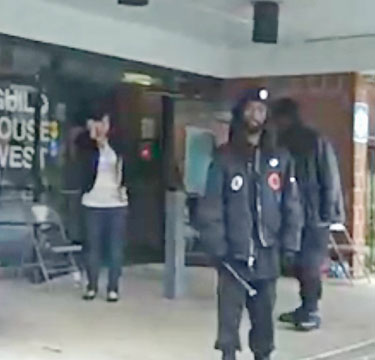 From Politico on Coates' background:

awards from civil rights groups and

"Commission Chairman Gerald Reynolds said Coates
From the Washington Post, 9/24/10, Coates has been given whistleblower protection:
------------------------------
1/27/11, Rubin: "The U.S. Commission on Civil Rights came out in December with a draft of its interim report on the New Black Panthers Party scandal. Earlier today a final report was posted on the commission's website, and with it, a flurry of rebuttals and separate statements from a number of the commissioners.

The documents are lengthy and can be accessed on the commission's Web site. I will highlight a few of the most salient passages.

After a year of DOJ's intransigence and baseless refusals to comply with our subpoenas, two Department attorneys bravely defied orders to testify before the Commission: the former Civil Rights Division Voting Section chief, Christopher Coates, and a lead trial attorney in the NBPP case, J. Christian Adams. Their testimony and the sworn affidavits from former DOJ staff portray a pervasive culture of hostility to race-neutral enforcement of civil rights laws in the Civil Rights Division. The detailed allegations include: a former section chief who doctored a memo to try to prevent a meritorious case from being filed against black defendants, racially offensive statements by several supervisors and staff, and repeated instances of harassment and intimidation directed against anyone willing to work on lawsuits against minority defendants.

On the merits of the case:

Although hampered by the Department's refusal to allow the Commission to interview DOJ trial attorneys or produce the exhibits, witness statements, and other evidence in the possession of DOJ, the Commission held its first hearing on April 23, 2010 relating to the facts on Election Day 2008 in Philadelphia and whether there was a sufficient basis to file the original charges. Three eye-witnesses, including the prominent civil rights attorney Bartle Bull, provided powerful and convincing testimony that the former defendants had engaged in intimidating conduct, and that voters had turned away from the polling place rather than walk within a billyclub swing of the entrance. Congressman Frank Wolf testified regarding his concerns about the case and his frustration with the lack of DOJ cooperation.

On pages 11-16 Gaziano details DOJ's stonewalling efforts, including the assertion of bogus claims of privilege. He does so, he explains,
As severe winter storms in Washington gave way to spring, the continued, frustrating correspondence with the Department began to reinforce the conclusion that something


Commissioner Gail Heriot, another independent appointee, echoes many of these same findings. She also provides ample evidence of hostility to a case against an African-American defendant in the Noxubee, Mississippi case. (pp.2-9).

As Gaziano and Heriot do, commissioner Peter Kirsanow (a Republican appointee) goes through the evidence of malfeasance by an Obama political appointee, Julie Fernandes:

Mr. [Chris] Coates [who headed the NBPP trial team] came forward and testified to the same statements having been made by Ms. Fernandes--statements made pursuant to a directive she conveyed to members of the Voting Section that the race of violators and victims is an appropriate consideration in the Division's enforcement decisions.

The uncontroverted testimony of Messrs. Coates and [former DOJ attorney J. Christian] Adams also identify Ms. Fernandes as having explicitly told a brown-bag lunch gathering of the entire Voting Section that the administration would not enforce the list maintenance provisions of Section 8 of the National Voter Registration Act ("NVRA").

He also explains, "The Department declined to allow Ms. Fernandes to answer questions about these allegations herself when it ultimately refused to honor the Commission's subpoena for her appearance. For her part, when asked directly by reporters,


Woven throughout these documents is a blistering rebuttal of the statements of Democratic commissioners who have done their best to ignore or misconstrue evidence, come up with belated and fanciful theories that not even the DOJ raised,

Finally, in a joint statement, these three commissioners explain the curious behavior of Abigail Thernstrom who endorsed the commission's investigation and then set out to ignore the evidence and undermine the commission's work. This statement should be read in full, and is a sad coda on Thernstrom's impressive career. A sample:

The Vice Chair strongly supported this investigation until the day she changed her mind and stormed out of a Commission meeting over what she evidently perceived as a personal slight, and the personal slight didn't even have anything to do with the New Black Panther Party (NBPP) investigation. After that she opposed the Commission's majority on almost every subject and called the NBPP matter we were investigating "very small potatoes" which did not merit the time the Commission was devoting to it. Her attendance at meetings dwindled as she participated in less than 45% of the official meetings and events of the Commission in 2010. On those occasions she did attend, she strongly criticized the NBPP investigation. . . .

We are baffled by the Vice Chair's repeated assertions that the investigation has uncovered no evidence of wrongdoing. The sworn testimony of Adams and Coates and the affidavits of Bowers and von Spakovsky are exactly that. The only interpretation of the Vice Chair's statements that we have been able to come up with is that she is looking for specific testimony in connection with the New Black Panther Party case itself. If so, Coates testified unequivocally that the case was dismissed because his superiors harbored hostility to the race neutral application of the law, but perhaps she wants written proof from one of the decision makers.

All of this has been explained to the Vice Chair on more than one occasion. But while she currently professes interest in obtaining evidence, her statements are belied by her past conduct, when she has either refused to help or attempted to prevent the Commission's efforts to obtain it.

And now the commission passes its findings on to Congress, specifically the new chairman of the House Judiciary Committee, Rep. Lamar Smith (R-Tex.) I suspect he will pick up where the commission left off and demand the stonewalling come to an end."

via RedState.com
Posted by susan at 12:47 AM

Email ThisBlogThis!Share to TwitterShare to FacebookShare to Pinterest
Labels: New Black Panther report by US Commission on Civil Rights now complete and on way to congress