.
12/23/10, "Obama's China wind power complaint backed by companies," Bloomberg News
"The case, filed at the World Trade Organization in Geneva yesterday, is the first by the U.S. over green technology after months of complaints about Chinese efforts to force manufacturers to make those products in the country....


Aid under the program since 2008 could total several hundred million dollars, the U.S. said....

The WTO case filed yesterday was one slice of a complaint filed with the U.S. trade office on Sept. 9 by the United Steelworkers union. The union said

give Chinese producers of renewable-energy products an unfair advantage....

The complaint “appears to be an appropriate first step,” John Frisbie, the president of the U.S.-China Business Council in Washington, which represents investors such as General Electric Co., the biggest U.S.-based wind-turbine maker, said in a statement....

Bloomberg article doesn't mention the issue of Communist Chinese monopoly of rare earth minerals necessary to make wind turbines. BBC says it was mentioned in the US Steelworkers complaint in September:

"The announcement follows a filing in September by the United Steelworkers Union (USW) which listed a number of industries it accused China of subsidising or otherwise distorting trade from non-nationals.

The trade representative announced no decision on that, but spokeswoman Nefeterius McPherson said the United States was

and could still file a case on that at the WTO."...

Our environmental rules and wages make it too expensive to extract here. We opted out of the "race" for green jobs. Most rare earths come from Communist China now. Rare earth smelting plant in 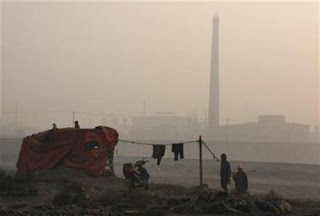