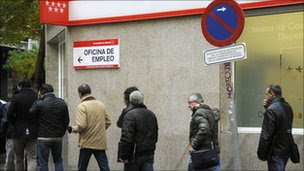 "Ratings agency Moody's has said it may downgrade Spain's credit rating - warning of problems the country faces in refinancing its debts next year....


But she has been an opponent of some suggested actions, including increasing the eurozone's 750bn euro bail-out fund or creating pan-European bonds to boost confidence in the euro....

"I can only warn Germany and France against making a claim to power, which reflects

Email ThisBlogThis!Share to TwitterShare to FacebookShare to Pinterest
Labels: Luxembourg warns Germany not to be haughty