2013 Terrorism and Political Violence Map for international business use 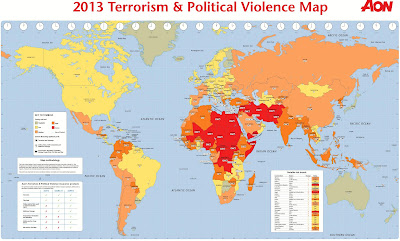 "The following map (via AON) measures the risk of political violence to international business in 200 countries and territories, based on three icons indicating the forms of political violence which are likely to be encountered: Terrorism and sabotage; Strikes, riots, civil commotion and malicious damage; and Political insurrection, revolution, rebellion, mutiny, coup d'etat, war and civil war." (AON is a risk assessment company)