.
When you act like the world’s doormat for decades, are openly mocked, you’re treated accordingly. US ruling class has always supported nations that breed Islamic terrorism.

“A top Iraqi diplomat urged Arab states to “use the weapon of oil” against the United States because of its alliance with Israel, raising more questions about the Middle Eastern nation’s allegiance to the country that freed it from a ruthless dictatorship.

The shocking statement from a democratic government in power only after the U.S. and allies ousted murderous dictator Saddam Hussein in a costly and bloody war laid bare the Middle Eastern nation’s true allegiance.

“Iraq will invite (Arab) ministers to use the weapon of oil, with the aim of asserting real pressure on the United States and whoever stands with Israel,” Qais al-Azzawy told reporters in Cairo on Friday.

“Iraq will invite (Arab) ministers to use the weapon of oil, with the aim of asserting real pressure on the United States and whoever stands with Israel.”- Iraqi diplomat

“The economic weapon is the strongest one to be put into effect now, to assure of standing by the Palestinian people, in light of there being no military power that can stand in the face of Israel at the present time,” he added.

The U.S. ousted Hussein, ending his bloody, 30-year reign in 2003 in the midst of a controversial and costly war. Nearly 4,500 American service members were killed and more than 32,000 wounded in a war that has cost U.S. taxpayers at least $750 billion. That figure could top $1 trillion given future health costs incurred by veterans injured in the fighting.

The oil-rich nation has by some measures the world’s third-largest reserves and, along with Arab nations such as Saudi Arabia and Libya, provides the U.S. only about 13 percent of its oil, according to the Energy Information Administration. But Arab oil producers wield tremendous influence on world prices through OPEC.

Iraq is standing with Hamas and Palestinians in the ongoing strife between them and Israel.”…

“That would have pointed to the Middle East’s regimes, and to our ruling class’ relationship with them, as the problem’s ultimate source. The rulers of Iran, Iraq, Syria, Egypt, Saudi Arabia, and the Palestinian Authority had run (and continue to run) educational and media systems that demonize America. Under all of them, the Muslim Brotherhood or the Wahhabi sect spread that message in religious terms to Muslims in the West as well as at home.
And indeed, ever since the 1970s U.S. policy had responded to acts of war and terrorism from the Muslim world by absolving the regimes for their subjects’ actions.”
=============================

US politicians are well known for coddling terrorists but Obama takes it to new heights. Sign below says, “Wait for us White House! Black flag is coming soon!!!” 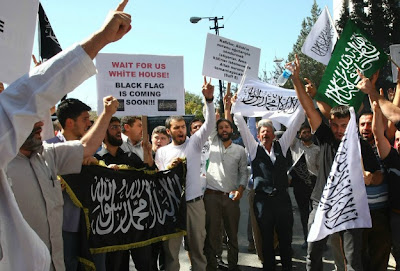 9/21/12, ““I think we’re at the most dangerous time in our political history in terms of the balance of power in the role that the media plays in whether or not we maintain a free democracy.””….