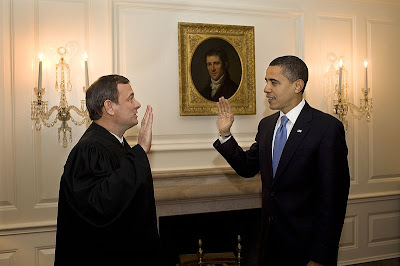 1/21/09, "To avoid any constitutional problems, Chief Justice John G. Roberts Jr. administers the oath of office a second time with Barack Obama in the Map Room of the White House on Wednesday, January 21, 2009." White House photo 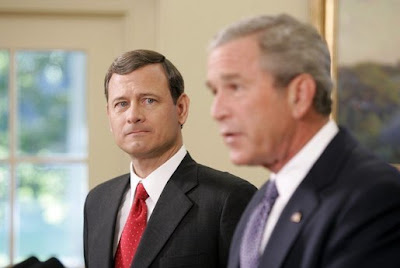 So. Does EJ Dionne Jr.still think Justice Roberts is a right wing lobbyist who should not be 'catered to?'

"On Wednesday, Chief Justice John Roberts sounded like the House whip in discussing whether parts of the law could stand if other parts fell. He noted that without various provisions, Congress “wouldn’t have been able to put together, cobble together, the votes to get it through.” Tell me again, was this a courtroom or a lobbyist’s office? It fell to the court’s liberals — the so-called “judicial activists,” remember? — to remind their conservative brethren that legislative power is supposed to rest in our government’s elected branches....

Liberals should learn from this display that there is no point in catering to today’s hard-line conservatives. The individual mandate was a conservative idea that President Obama adopted to preserve the private market in health insurance rather than move toward a government-financed, single-payer system. What he got back from conservatives was not gratitude but charges of socialism — for adopting their own proposal.

The irony is that if the court’s conservatives overthrow the mandate, they will hasten the arrival of a more government-heavy system. Justice Anthony Kennedy even hinted that it might be more “honest” if government simply used “the tax power to raise revenue and to just have a national health service, single-payer.” Remember those words."...