Parasite Oxfam gives pass to corrupt dictators, says it's bullets that must be subject to world government regulation

.
Self-appointed global dictator Oxfam diverts attention from despots, says it's bullets and guns that need regulation by unelected world government. Oxfam claims it's concerned with 'human rights' but if that were the case it would demand the UN 'Human Rights Council' be closed down.

"Humanitarian charity Oxfam has launched a new campaign to call for the regulation of the sale of ammunition around the world.

It comes ahead of a United Nations summit in July on bringing in a new arms trade treaty to regulate the sale of arms.

Oxfam is arguing that any treaty must also regulate ammunition trade or the treaty "doesn't make sense".

But a number of nations, including the US and China, oppose such a move.

Egypt, Syria, Russia, Iran, Venezuela and several other countries are also against including ammunition trade in any final treaty, arguing that it will be too difficult to monitor....

The parameters of the new treaty, if is is passed, will be worked at a month-long UN conference in July between arms companies, governments and aid agencies.

A draft treaty which would ban all weapons sales to countries that fail to meet various human rights criteria has already been provisionally agreed to by 153 counties.

The aim is for it to bring various international laws governing the sale of arms into one legally-binding treaty."

Below, Sharia law in Nigeria demanded man's hand be amputated. 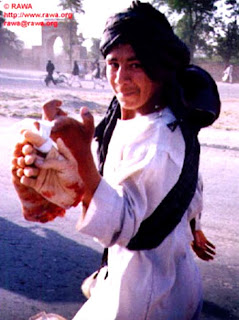 Stoning to death via Sharia "still exists on the law books in Afghanistan, Iran, sections of Nigeria, Pakistan, Sudan, and the United Arab Emirates."

7/8/10, "Where is stoning legal, and how is it done?" MSNBC and news service reports

"As I spoke to these symposium participants (who came from Nigeria, the former Soviet republics, Pakistan and elsewhere), I couldn't help but notice a correlation between mafia government and the existence of violent religious extremism. And I realized that the phenomenon of public corruption — often pooh-poohed or viewed as a part of the ambient "culture" of South Asians, or Muslims or whomever —

Then my musings led me further afield, to consider political philosophy. Was mafia government, I began to wonder, also posing a threat to the entire phase of political history in which we live?"...