"Last year New York Times columnist and Nobel laureate Paul Krugman called for space aliens to invade earth so that the government would spend money to mount a defense thereby stimulating the economy.

As aliens have yet to comply with Krugman's wishes, he advocated on HBO's Real Time Friday that scientists should get together and lie about an imminent attack to boost federal spending (video follows with transcript and commentary)....

(From HBO Real Time): PAUL KRUGMAN, NEW YORK TIMES: "This is hard to get people to do, much better, obviously, to build bridges and roads and healthcare clinics and schools. But my proposed, I actually have a serious proposal which is that we have to get a bunch of scientists to tell us that we're facing a threatened alien invasion, and in order to be prepared for that alien invasion we have to do things like build high-speed rail. And the, once we've recovered, we can say, “Look, there were no aliens.”

But look, I mean, whatever it takes because right now we need somebody to spend, and that somebody has to be the U.S. government." [end quote]

High-speed rail to defend ourselves against space invaders?

As absurd as this seems, folks should realize that to a certain extent, scientists are already doing this.

Consider those in the scientific community on Al Gore's side of the anthropogenic global warming debate.

They have indeed fabricated a doomsday scenario related to carbon dioxide emissions with the expressed intent of getting governments around the world to spend what could end up being trillions of dollars fending off a phantom just as fictitious as Krugman's aliens.

As the Nobel laureate said, "Whatever it takes." This is the Machiavellian way zealots view their causes.

And this man not only has a column in the New York Times from which to publicize such nonsense, people actually give him awards for it."...

"The leftist zealots behind the climate change scare are predictably also big time supporters of lying to deceive the public:

“It doesn’t matter what is true, it only matters what people believe is true.” -Paul Watson, co-founder of Greenpeace, ["Quoted by Dixy Lee Ray in her book Environmental Overkill (1993)"]

“We have to offer up scary scenarios… each of us has to decide the right balance between being effective and being honest.” -Stephen Schneider, ipcc author, 1989, [Discover Magazine, Oct. 1989]

“The only way to get our society to truly change is to frighten people with the possibility of a catastrophe.” -Daniel Botkin, Chairman of Environmental Studies at UCSB

“In searching for a new enemy to unite us, we came up with the idea that .. global warming.. would fit the bill…It does not matter if this common enemy is a real one or…one invented for the purpose.” -Club of Rome" (detail on attribution below) 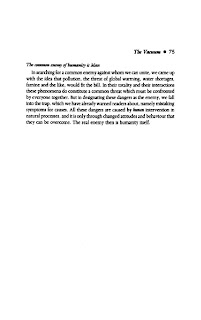 "The threat to the world, as is always the case, is a current group(s) of humans who want to impose their values and desires on others."

""We've got to ride the global warming issue. Even if the theory of global warming is wrong, we will be doing the right thing, in terms of economic policy and environmental policy. " - Timothy Wirth quoted in Science Under Siege by Michael Fumento, 1993

via Climate Depot
Posted by susan at 7:39 AM