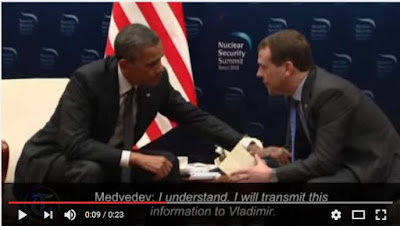 Above, 3/26/2012, Obama reaches across the table to press the hand of Russian Pres. Medvedev to emphasize his deep sincerity about giving Putin what he wants after the Nov. 2012 election when he'll never again have to face US voters. Screen shot from UK Telegraph video.

"Obama: “This is my last election. After my election, I have more flexibility.”

Medvedev: “I understand. I will transmit this information to "Vladimir.”

"President Obama said something important and revealing on Monday in South Korea....

Mr. Obama was talking with Russian President Dmitry Medvedev when neither of them realized that their conversation was being picked up by microphones. Here is what they said:

Obama: “On all these issues, but particularly missile defense, this, this can be solved, but it’s important for him to give me space.”

Obama: “This is my last election. After my election, I have more flexibility.”

Medvedev: “I understand. I will transmit this information to Vladimir.”

“This is my last election. After my election I have more flexibility.” That statement tells us much about the president’s mindset.

The specific mention of missile defense is worrisome enough. Mr. Obama has retreated from the missile defense plan that was negotiated with European allies during the George W. Bush administration. Apparently, he is signaling Moscow that he intends to retreat further. The clear implication from the president’s comments is that he cannot tell the American people before the election what he plans to do after the election.

In addition, there is the phrase “on all these issues,” implying more is at stake than just missile defense.

For example, the White House has floated proposals for more deep cuts in our nuclear deterrent-as much as 80 percent. In mid-February, I had the chance to ask Defense Secretary Leon E. Panetta and Joint Chiefs of Staff Chairman Gen. Martin E. Dempsey about these trial balloons. I told them that such talk does nothing but encourage our enemies to pursue nuclear weapons and discourage our friends from believing they can count on our nuclear deterrent. The result is a more dangerous world with more nuclear-weapons programs spread across it.

“More flexibility” without having to answer to voters again may well mean cuts in nuclear weapons and capability that will end the peace-through-strength approach pursued by both parties for more than 50 years. In addition, “more flexibility” in an attempt to please Russian President-elect Vladimir Putin also could include a host of other measures that weaken the United States and reduce the confidence other nations have in us....

Mr. Obama seems anxious to be unshackled from the American voters so he can do what he thinks is best for all of us without having to be accountable for it. His comments are revealing-and deeply disturbing. Undoubtedly, they should be an important turning point for those who may be unsure of his leadership and the direction in which he seeks to take our country now and in the future."

"Russian President Vladimir Putin said the re-election of President Barack Obama could improve relations with the U.S., but that he was also prepared to work with Mitt Romney, calling the Republican candidate's tough stance on Russia "pre-election rhetoric."

In contrast to what had been viewed as a chilly attitude toward Mr. Obama, Mr. Putin called his U.S. counterpart "a genuine person" who "really wants to change much for the better." Speaking to Russia's state-run RT television channel, he said a second Obama term could help solve disputes over missile defense....

Relations with Russia first heated up the campaign in March [2012], when Mr. Obama was inadvertently caught on an open microphone telling Mr. Putin's predecessor, Dmitry Medvedev, that he would have "more flexibility" after the election to address Russia's concerns over the proposed U.S. antimissile shield in Europe.

The U.S. says the defense system is designed to protect against a possible missile attack from Iran, but Moscow says the interceptors could neuter Russia's nuclear arsenal....

Mr. Romney said Russia was America's "No. 1 geopolitical foe." Mr. Putin said such talk was "mistaken" electioneering, adding he was prepared to work with whomever Americans elect. He [Putin] warned, however, that a Romney victory could complicate attempts to resolve Russia's opposition to the shield.

"Our American partners tell us, 'It's not [aimed] against you.' But what if the president of the United States will be Mr. Romney, who considers us enemy No. 1?" he told RT in the interview, recorded Monday and broadcast Thursday.

In his broadest public comments since returning to office in May, Mr. Putin also stuck firmly to his position against outside intervention to end violence in Syria and brushed off Western criticism that he is cracking down on the nascent antigovernment protest movement in Russia. He said Russia, which has vetoed three U.N. Security Council resolutions aimed at pressuring the Syrian authorities to end violence, wouldn't shift its stance.

"Why should only Russia re-evaluate its position?" he said. "Maybe our partners in the negotiation process should re-evaluate their position."

He suggested that efforts to aid militants in bringing down the regime of President Bashar al-Assad would backfire and create a situation like that seen in Afghanistan after the defeat of the Soviet Union by mujahedeen fighters.

He said that would undermine efforts to tackle global terrorism and that the U.S. may as well "open the gates to Guantanamo and let all the Guantanamo inmates into Syria, let them fight. It's the same thing."

Mr. Putin did, however, change tack on the Arab Spring protests, which he had earlier described as a Western attempt to advance its interests in the region. In the interview, he said the uprisings in North Africa and the Middle East happened as leaders hadn't responded quickly enough to people's demands for change.

Turning to his response to protests in Russia that swelled at the end of last year, Mr. Putin rejected claims he is clamping down on dissent.

"What is 'tightening the screws'?" he said. "If this is a requirement that everyone, including representatives of the opposition, obey the law, then yes, this requirement will be consistently implemented.""...