.
UPDATE, 1/22/12, Obviously it must be Gingrich over Obama. Pamela Geller describes it best: "He's a son of a bitch, but he's our son of a bitch." Romney was hell bent on losing, would not bend. A carbon copy of McCain who never wanted to win, told us to shut up, that Obama would be fine. Such a person should of course not be a presidential candidate:

"Newt Gingrich’s rise has a lot to do with Newt Gingrich’s debate performance. But it has just as much to do with a party base in revolt against its thought and party leaders in Washington, DC. The base is revolting because they swept the GOP back into relevance in Washington just under two years ago and they have been thanked with contempt ever since.

Adding insult to injury, the party and thought leaders now try to foist on the base a milquetoast moderate from Massachusetts. Newt Gingrich can thank Mitt Romney and more for the second look he is getting. Base hostility will now be exacerbated by Mitt Romney’s backers now undoubtedly making a conscious effort to prop up Rick Santorum to shut down Newt Gingrich."...

Even some Tea Party people like being tricked and lied to by Gingrich. 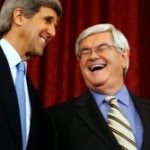 "Gingrich, a former Republican House speaker, refused to play Douglas to Kerry's Lincoln, instead positioning himself as a tree-hugging green.

Before Kerry got a word in, Gingrich conceded that global warming is real, that humans have contributed to it and that "we should address it very actively." Gingrich held up Kerry's new book, "This Moment on Earth," and called it "a very interesting read." He then added a personal note about saving vulnerable species from climate change. "My name, Newt, actually comes from the Danish Knut, and there's been a

But Gingrich, weighing a long-shot presidential run, is unpredictable. He proved that by meeting with Sen. Hillary Rodham Clinton to discuss common ground on health care, and yesterday it was Kerry's turn to be surprised when Gingrich preemptively distanced himself from President Bush on global warming. "I agree entirely with whatever criticism the senator wants to make in general about the absence of American leadership," he said.

Even his one big difference with Kerry -- Gingrich favored tax incentives to reduce carbon dioxide rather than a government "cap and trade" program -- was negotiable. "I am not automatically saying that coercion and bureaucracy is not an answer," he granted....

Later, Kerry tried to switch places with Gingrich, branding him a big-government liberal. "You know, this is a huge transition," he exclaimed. "You actually want the government to do it. I want the private sector to do it."...

The definition of global/climate change is that all Americans are criminals and must pay billions in climate reparations. Gingrich says he believes in 'climate change.' Without explaining how ice ages have come and gone. I think it's criminal to advance this theory which has robbed billions from Americans with much more in the pipeline. In fact, organized crime has benefited the most from it.

Gingrich said in 2010 that he would do an ad with Pelosi again, and he'd even do one with Al Gore. (Al Gore admitted he lied about ethanol to get elected).

GORE: ""It is not a good policy to have these massive subsidies for (U.S.) first generation ethanol," said Gore, speaking at a green energy business conference in Athens sponsored by Marfin Popular Bank.

He explained his own support for the original programme

Gingrich says he took $300,000 from the ethanol lobby in 2009 for "urgent national security" reasons.

"“I am not a lobbyist for ethanol,” Newt Gingrich declared in a mid-winter spat with the editors of The Wall Street Journal over his support for government subsidies for alternative fuel.

But Gingrich was a hired consultant to a major ethanol lobbying group—at more than $300,000 a year.

According to IRS records, the ethanol group Growth Energy paid Gingrich’s consulting firm $312,500 in 2009.The former House Speaker was the organization’s top-paid consultant, according to the records. His pay was one of the group’s largest single expenditures, as it took in and spent about $11 million to promote ethanol and to lobby for federal incentives for its use....

“Not only is this tax credit expensive and unnecessary, it has produced many unfavorable consequences including higher food prices, lower fuel efficiency and increased incidences of engine damage in motor vehicles,” CAGW says in a report on its website....

"At the same time, Gingrich’s committee, American Solutions for Winning the Future, raised hundreds of thousands of dollars from fossil fuel interests....

The Journal fired back in an editorial that called Gingrich “Professor Cornpone” and accused him of pandering to farmers and ethanol producers.

“Given that Mr. Gingrich aspires to be President, his ethanol lobbying raises larger questions about his convictions and judgment. The Georgian has been campaigning in the tea party age as a fierce critic of spending and government, but his record on that score is, well, mixed,” the newspaper said.”

Gingrich responded with a letter to the editor. “I am not a lobbyist for ethanol, not for anyone,” he wrote. “My support of increased domestic energy production of all forms, including biofuels and domestic drilling, is

"It’s depressing that Gingrich, much like Bob Barr and Al Gore, is willing to shed intellectual honesty to win votes."...

7/16/10, "America's Ruling Class-and the perils of Revolution," by Angelo Codevilla

Email ThisBlogThis!Share to TwitterShare to FacebookShare to Pinterest
Labels: did ad with Pelosi, Gingrich pitched John Kerry global warming book, said he would do one with Al Gore