Fact check on Politico: It's Donald Trump's party now. The US likes other countries to have 'regime change,' right? So the Republican Party had stunning, historic regime change. Politico's GOP E pals are generals without armies. Trump is the only elected Republican with an army. If GOP E is "walking on eggshells" they should relax. It's over, and they lost

No need for GOP E to be on"eggshells:" It was over last year and they lost to Trump in a landslide, "in testimony to how thoroughly they [voters] reject the Republican politicians who betrayed them."...(NY Times Editorial Board, 5/3/2016)

Even the NY Times Editorial Board was honest enough to admit that the 2016 Republican voters' message "is testimony to how thoroughly they reject the Republican politicians who betrayed them."...

"Republican leaders have for years failed to think about much of anything beyond winning the next election. Year after year, the party’s candidates promised help for middle-class people who lost their homes, jobs and savings to recession, who lost limbs and well-being to war, and then did next to nothing.

That Mr. Trump was able to enthrall voters by promising simply to “Make America Great Again” — but offering only xenophobic, isolationist or fantastical ideas — is testimony to how thoroughly they reject the politicians who betrayed them."...

“The next governing coalition that calls itself conservative will have to reflect the views of the pro-Trump voters," Laura Ingraham, NY Times, July 16, 2016

"Laura Ingraham, a conservative radio host supportive of Mr. Trump, said the party’s future base would have to be made up of “working-class nationalists,” who have been drawn to Mr. Trump and reject the Bush-era policies around immigration and trade.

“The next governing coalition that calls itself conservative will have to reflect the views of the pro-Trump voters,” she said."...(8 parags. from end) 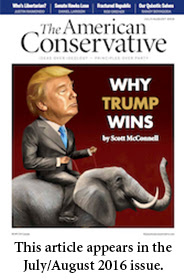 "He managed to prevail—to mount the most astonishingly successful insurgent campaign against a party establishment in our lifetimes....He won the GOP’s untapped residue of nationalist voters, in a system where the elites of both parties are, as if by rote, extreme globalists. He won the support of those who favored changing trade and immigration policies, which, it is increasingly obvious, do not favor the tangible interests of the average American.

He won the backing of those alarmed by a new surge of political correctness, an informal national speech code that seeks to render many legitimate political opinions unsayable. He won the support of white working-class voters whose social and economic position had been declining for a generation."...6/27/16, "Why Trump Wins," "He knows border wars have replaced culture wars." The American Conservative, by Scott McConnell

"The Republican Party, for whatever reason, refuses to be an opposition party."

"The Republican Party, for whatever reason, refuses to be an opposition party. The Republican Party refuses to stand up and even make the pretense of trying to stop Barack Obama.  Out in the real world, Barack Obama and the Democrat Party are seen as destroying this country. And not just domestically; they're destroying the military; they're destroying foreign policy. They are nuking up Iran. They are behaving in ways that befriending our enemies and alienating our friends and allies -- and people are at their wits' end.

They [Republican voters] have voted, in large numbers, expecting there to be some opposition and push-back to this. That's the standard, normal procedure in politics. Politics is at least two competing organizations, and the winning organization always faces opposition by the losing organization 'cause it wants to get back in power. Well, the people that vote for Republicans are not seeing any opposition.  They're not seeing any push-back.  In fact, it's even worse than that.  They're seeing the Republican Party agree with the Democrats on something as key as open borders.

They have campaigned. They've gotten out the vote. They have shown up as the Tea Party. They've gone to town meetings. They have gone neighborhood door-to-door. They've manned the phone banks. They've done all of that. They've got nothing to show for it except maybe they lose their job, maybe they're cut back to 30 hours, maybe their neighborhood Walmart's closing down.  Everything's caving in on them! They're the ones playing by the rules. They're not cultural perverts. They're not people breaking the law.

They're doing everything they can to play by the rules, and they don't think anybody is standing up for 'em or representing them.

They feel powerless.
They feel like they're being targeted.

They think they're being blamed for whatever's gone wrong in this country that Obama and the Democrats don't like. And they're not to blame. They represent what's great about this country, and they're being winnowed out. Well, it only stands to reason that when somebody comes along and lets them know that he agrees with that -- and these days are over and we're gonna make this country great again and you're gonna help me do it -- and we're together gonna make this country great, I guarantee you that is a magnet that no Republican, conservative, expert, think tank, whatever, can stop.

Email ThisBlogThis!Share to TwitterShare to FacebookShare to Pinterest
Labels: massively rejected by voters, McConnell and Ryan are generals without armies