.
8/4/14, "Climate change not so global," University of Queensland, Australia

"Scientists are calling for a better understanding of regional climates, after research into New Zealand's glaciers has revealed climate change in the Northern Hemisphere does not directly affect the climate in the Southern Hemisphere.

The University of Queensland study showed that future climate changes may impact differently in the two hemispheres, meaning a generalised global approach isn’t the solution to climate issues.

UQ School of Geography, Planning and Environmental Management Head Professor Jamie Shulmeister said the study provided evidence for the late survival of significant glaciers in the mountains of New Zealand at the end of the last ice age – a time when other ice areas were retreating..

“This study reverses previous findings which suggested that New Zealand's glaciers disappeared at the same time as ice in the Northern Hemisphere,” he said.

“We showed that when the Northern Hemisphere started to warm at the end of the last ice age, New Zealand glaciers were unaffected.

“These glaciers began to retreat several thousand years later, when changes in the Southern Ocean led to increased carbon dioxide emissions and warming.

”This indicates that future climate change may impact differently in the two hemispheres and that changes in the Southern Ocean are likely to be critical for Australia and New Zealand.”

The study used exposure dating of moraines - mounds of rocks formed by glaciers - to reconstruct the rate of ice retreat in New Zealand’s Ashburton Valley after the last glacial maximum – the time when the ice sheets were at their largest.

The researchers found that the period from the last glacial maximum to the end of the ice age was longer in New Zealand than in the Northern Hemisphere.

They also found that the maximum glacier extent in New Zealand occurred several thousand years before the maximum in the Northern Hemisphere, demonstrating that growth of the northern ice sheets did not cause expansion of New Zealand glaciers.

“New Zealand glaciers responded largely to local changes in the Southern Ocean, rather than changes in the Northern Hemisphere as was previously believed,” Professor Shulmeister said.

“This study highlights the need to understand regional climate rather than a global one-size-fits-all.”

The research was conducted in collaboration with the University of Griefswald, Germany, the Australian Nuclear Science and Technology Organisation, and the University of Canterbury, New Zealand, and published in the Proceedings of the National Academy of Science in July."
............

"This record from a key site in the midlatitude Southern Hemisphere shows that the largest glacial advance did not coincide with the coldest temperatures during this phase. We also show that the regional post-LGM ice retreat was very gradual, contrary to the rapid ice collapse widely inferred. This demonstrates that glacial records from New Zealand are neither synchronous with nor simply lag or lead Northern Hemisphere ice sheet records, which has important implications for the reconstruction of past interhemispheric climate linkages and mechanisms.".

"Recent debate on records of southern midlatitude glaciation has focused on reconstructing glacier dynamics during the last glacial termination, with different results supporting both in-phase and out-of-phase correlations with Northern Hemisphere glacial signals. A continuing major weakness in this debate is the lack of robust data, particularly from the early and maximum phase of southern midlatitude glaciation (∼30–20 ka), to verify the competing models....These findings preclude the previously inferred rapid climate-driven ice retreat in the Southern Alps after the onset of Termination 1. Our record documents an early last glacial maximum, an overall trend of diminishing ice volume in New Zealand between 28–20 ka, and gradual deglaciation until at least 15 ka."

NASA confirms above: Unlike the Arctic, the Antarctic is isolated from major population centers and emissions they produce, in particular it's not exposed to wind driven black carbon from Asia:

4/8/2009, "Aerosols May Drive a Significant Portion of Arctic Warming," nasa.gov/topics

"The Arctic region has seen its surface air temperatures increase by 1.5 C (2.7 F) since the mid-1970s. In the Antarctic, where aerosols play less of a role, the surface air temperature has increased about 0.35 C (0.6 F)....
.
Since decreasing amounts of sulfates and increasing amounts of black carbon both encourage warming, temperature increases can be especially rapid. The build-up of aerosols also triggers positive feedback cycles that further accelerate warming as snow and ice cover retreat.

In the Antarctic, in contrast, the impact of sulfates and black carbon is minimized because of the continent’s isolation from major population centers and the emissions they produce....

A new study, led by climate scientist Drew Shindell of the NASA Goddard Institute for Space Studies, New York, used a coupled ocean-atmosphere model to investigate how sensitive different regional climates are to changes in levels of carbon dioxide, ozone, and aerosols.

The researchers found that the mid and high latitudes are especially responsive to changes in the level of aerosols. Indeed, the model suggests aerosols likely account for 45 percent or more of the warming that has occurred in the Arctic during the last three decades. The results were published in the April issue of Nature Geoscience....

Sulfates, which come primarily from the burning of coal and oil, scatter incoming solar radiation and have a net cooling effect on climate. Over the past three decades, the United States and European countries have passed a series of laws that have reduced sulfate emissions by 50 percent. While improving air quality and aiding public health, the result has been less atmospheric cooling from sulfates.

At the same time, black carbon emissions have steadily risen, largely because of increasing emissions from Asia. Black carbon -- small, soot-like particles produced by industrial processes and the combustion of diesel and biofuels -- absorb incoming solar radiation and have a strong warming influence on the atmosphere."...

Added: The entire Southern Hemisphere is lucky to have avoided having its environment ruined by George Bush #1: 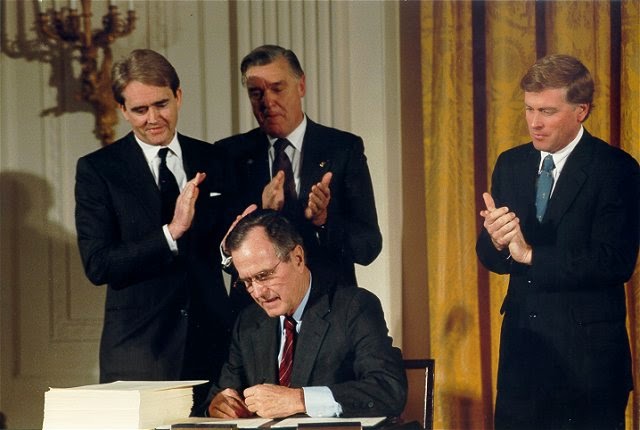 Post 1970  global warming "is driven by efforts to reduce air pollution in general and acid deposition in particular."...2011 PNAS study 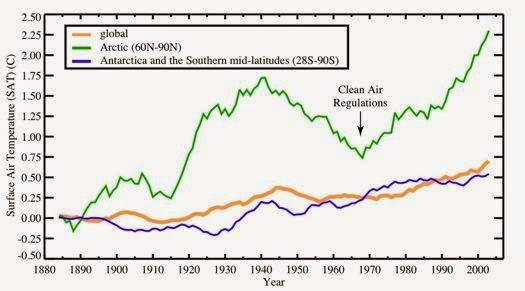 4/8/2009, "Half of recent arctic warming may not be due to greenhouse gases," Houston Chronicle, Eric Berger

July 19, 2011 PNAS study finds post 1970  warming "is driven by efforts to reduce air pollution in general and acid deposition in particular, which cause sulfur emissions to decline."

"The post 1970 period of warming, which constitutes a significant portion of the increase in global surface temperature since the mid 20th century, is driven by efforts to reduce air pollution in general and acid deposition in particular, which cause sulfur emissions to decline while the concentration of greenhouse gases continues to rise (7)."...

In a section titled "Results" the PNAS study says cooling sulfur emissions rose somewhat after 2002 due to extreme acceleration of China's coal use, which "partly reverses a period of declining sulfur emissions that had a warming effect of 0.19 W/m2 between 1990 and 2002." (Subhead "Results")

For reference, the purpose of this 2011 PNAS study was to address "the lack of a clear increase in global surface temperature between 1998 and 2008:"

Climate Change Not ‘One-Size-Fits-All’ A study of moraines shows that climate change has differential effects on the Northern and Southern hemispheres. Asian Scientist Newsroom | August 5, 2 Read more from Asian Scientist Magazine at: http://www.asianscientist.com/2014/08/in-the-lab/climate-change-one-size-fits-all-2014/
Posted by susan at 8:59 AM