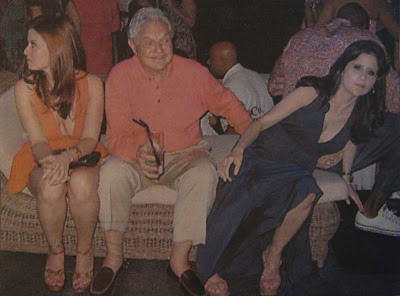 "GEORGE Soros got an early start to his New Year's celebration on Tuesday when he partied the night away with two young brunettes aboard fellow billionaire Paul Allen's yacht, Octopus, in St. Barts. A witness said the left-leaning financier showed up with the pair of lovelies and appeared quite "friendly" with them, making a little like an octopus himself (above). At one point,
Soros, 78, was seen trampling all over one of their gowns as he enjoyed a beverage...

In fact, any 78 year old party animal should be celebrated.

In a discredit to himself, Bon Jovi has Soros and the Hollywood robots over to his yacht on St. Barts.

MESSAGE TO EVERY MEMBER OF CONGRESS:

When counting the electoral votes, either Congress finds by 1/8/09 that Obama, not being an Article II “natural born citizen”, fails to qualify as President whereupon Biden becomes the full fledged President under 3 USC 19 (free to pick his own VP such as Hillary) or thereafter defers to the Supreme Court to enjoin Obama’s inauguration with Biden becoming only Acting President under the 20th Amendment until a new President is duly determined.

The preferable choice, at least for the Democrats, should seem obvious.